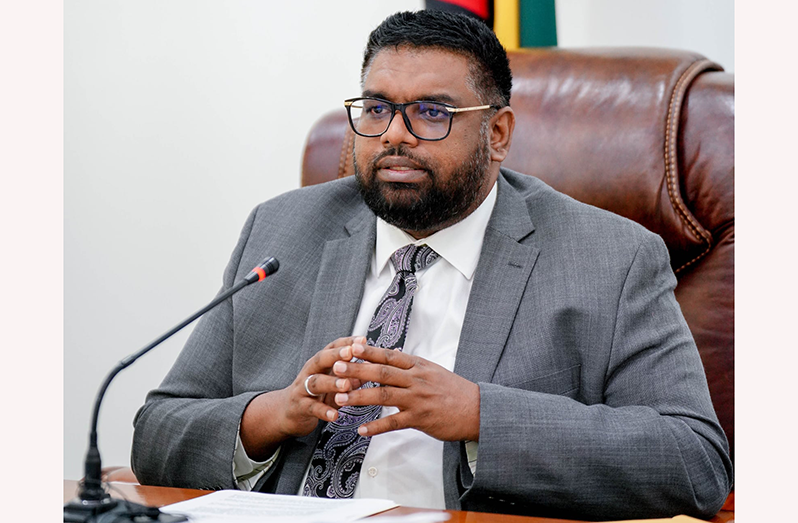 –President Ali promises as a volcano threatens to erupt

CITIZENS of St Vincent and the Grenadines are waiting with bated breath as scientists warn that the island’s La Soufriere volcano, which has been continuously erupting since December, may erupt in perhaps a few hours or days.
This is according to reports published by iWitness News on Thursday. The report quoted Professor Richard Robertson as saying that the higher volcanic-tectonic (VT) earthquakes in March suggested fresh magma was trying to reach the surface.
Robertson, the leading scientist monitoring the volcano, was at the time addressing an emergency press conference hosted by St Vincent’s Prime Minister Ralph Gonsalves.
As the people of St Vincent prepare for the worst, the Government of Guyana has confirmed its readiness to provide support to the island. This assurance was given by President Dr. Irfaan Ali, Thursday evening. “Given [sic] to the emerging situation in St. Vincent and the Grenadines, this afternoon [Thursday], I called the Prime Minister Dr. Ralph Gonsalves and reassured him of Guyana’s full support in dealing with this impending crisis, ”President Ali said in a statement.

He added: “The First Minister and I discussed immediate support, which will be required in the response. The First Minister noted that, besides the need to evacuate citizens, there were other urgent needs. Dr. Ali, having received the full list of island needs, Guyana would immediately draw up a national response to supply the items and arrange for them to be shipped to St. Vincent and the Grenadines. “At this time, we would like to secure the unwavering support and solidarity of St Vincent and the Guyana Grenadines,” concluded the Guyanese Head of State. Similar sentiments were also expressed by the Minister for Foreign Affairs and International Cooperation, Hugh Todd, who reminded, in an invited comment, that Guyana was known to be one of the first countries to respond and provide assistance in the event of disasters. happening in the Region, and this time would be no different. Early Thursday afternoon, St. Vincent’s Prime Minister Gonsalves had not issued any evacuation orders; however, by Thursday evening island officials confirmed those orders were coming through.

CHANGE IN SEISMICITY
The iWitness News agency had reported, around 03:00 hours on Thursday, that there was a significant change in seismicity where the station closest to the volcano began recording low-level vibration. Robertson, a geologist, said tremor is essentially a continuous vibration from the earth. The tremor was said to be ongoing, with one even taking effect while Robertson was speaking to the press. Robertson described the vibrations as “band vibrations,” usually associated with magma moving to the surface. Another thing that the monitoring team noticed on Thursday morning was the high and continuous emission of gas. These gases have been maintained, which is another sign that fresh magma is coming through, Robertson said.
He noted that the implication is that this magma is on or near the surface and the possibility of the volcano erupting has increased significantly, based on the activity being recorded.
However, given the data, the monitoring team still can’t say when an explosive eruption might occur, Robertson said, adding that what is clear is that the volcano has “uploaded the ante.” ”

“We are now in a period where we will not be surprised if at some point in the future we have explosive or explosive activity,” he said.
Robertson said, however, that his team would also not be surprised if the volcano continued to emit alert, as it has been doing for the past three months.
The geologist stressed that an explosive eruption can happen anytime now, adding that there may be sharper signals or an explosive eruption in the next few hours or days.
“The volcano has changed, it has given us a few more signals,” he said, noting that the eruption started with extrusion, there were VT earthquakes and now the steam-related vibration driven by magma. He said the possibility that the material now coming out of the volcano could have more energy, is what increases the chance of an explosive eruption.
Robertson said his recommendation to the National Emergency Management Institute (NEMO) is that preparations should be completed within a few hours, because scientists are uncertain about the timescale of an explosive eruption. As he spoke, the next era of bandwrecks had begun.
Michelle Forbes, Director of NEMO, meanwhile, said her team has been in Cabinet discussions with various agencies to increase preparation if an evacuation order is granted.

FULL ACTION
He said that disaster managers were preparing shelters, that the response mechanism had been fully implemented and that the national disaster management council would meet at 14:00 hours [on Thursday]. He said communities north of the Rabacca Dry River should be prepared should an evacuation order be issued.
Forbes said that arrangements should be put in place to move elderly people who need to move and that NEMO is working with government agencies and the private sector to get things in place in the event of an evacuation.
Meanwhile, Gonsalves made a phase three statement, which under the NEMO Act mandates the relevant agencies to prepare for a possible volcano eruption. The next step is four, which shows that an explosive explosion is actually happening.
The First Minister noted that no evacuation order had been issued, but that there was a statement that there was a significant prospect of a disaster strike. This alert stays within the framework of an orange alert, Gonsalves said, referring to the stage the alert has been in since the effusive explosion began in December.

He said his government will follow the science and will continue to take the advice of Robertson and his team of scientists.
“And if the occasion arises within the next few hours or days, it becomes necessary and desirable to issue an evacuation order, then it will be issued and this is the stage where that statement it is done within the framework of the law, ”he said.
He said Robertson told the government that if the volcano erupts, there could be a four-month period of evacuation. The Prime Minister said his government had been in contact with friendly nations, including the United States, Cuba, and Venezuela to discuss possible aid.
He said Barbados and St. Lucia is ready to receive evacuees, but will need to be vaccinated against COVID-19. Further, Royal Caribbean has indicated that it could reach St. Vincent by Wednesday night, a cruise ship that can house 1,500 people, who will also have to be vaccinated before they are allowed to occupy the ship.
The planned reopening of the school next Monday has been suspended pending further notice.