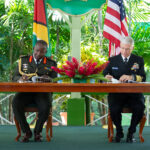 Chief of Staff of the Guyana Defense Force (GDF), Brigadier Godfrey Bess, (left) and the Commander of the US Southern Command, Navy Admiral Craig S. Faller.

Kaieteur News – Yesterday Guyana and the United States of America (USA) signed an agreement allowing the exchange of goods and services between the defense forces of the two countries.
The Procurement and Cross-Service Agreement was signed by the Chief of Staff of the Guyana Defense Force (GDF), Brigadier Godfrey Bess, on behalf of the Co-operative Republic of Guyana, and the Commander of the US Southern Command, Navy Admiral. Craig S. Faller.
The signing of the agreement paved the way for the exchange of goods or services of equal value to support future bilateral defense cooperation. The purpose of the agreement is to establish basic terms, conditions and procedures to facilitate the provision of logistical assistance, supplies and services between the two countries.
The event was held at the Barabi Benab, at the State House, Carmichael Street, Georgetown.
In his remarks after signing the agreement, Brigadier Bess said, “I am pleased today to be joined by Admiral Craig Faller, Commandant of the Southern Command of the United States. His presence here today symbolizes the excellent relationship between the militaries of the United States of America (USA) and the Cooperative Republic of Guyana. ”
He added that with the agreement, both militaries will now be able to expand their response to addressing issues such as climate change, narcotics trafficking, terrorism, small arms and human trafficking.
He said, “These threats, if left unattended, can erode national security and undermine regional stability. The Guyana Defense Force (GDF) is therefore seeking to increase defense cooperation as a means of improving responsiveness to natural disasters and transnational criminal threats. ”
Brigadier Bess also pointed out that Guyana is part of a Region prone to natural hazards, which has the potential to undermine security and stability in a country.
Admiral Faller said in his remarks that it is an honor to be in Guyana to show another step in the long-standing bilateral treaty military-to-military security agreement.

He added, “With this agreement we are entering a new era of defense partnership. For over half a century our countries have built a bond of friendship… ”
Admiral Faller arrived in Guyana on Monday, and is on a three-day visit. The Southern Command is one of six unified Department of Deficiency commands focused on geography with responsibility for U.S. military operations in the Caribbean, Central America and South America, as well as security cooperation with defense and public security forces in the region.
The United States and Guyana have a history of security cooperation, and the defense partnership between the two countries includes cooperation against regional threats and challenges, capacity building commitments, bilateral training, exchange of expertise, exercises, and participation in education programs military.
Last September, during Secretary of State Mike Pompeo’s visit, the two countries signed a Shipping Agreement, which allows US Coast Guard to patrol local waters.
The first joint service exercise between the two countries’ Coast Guard took place last Saturday to combat illegal fishing activities in local waters.