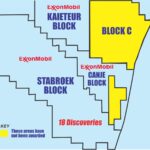 Kaieteur News – Government of Guyana is considering placing oil blocks for sale through bidding rounds in 2021.
This would allow Guyana to get much needed revenue, as those previously awarded are distributed for free. However, concerns remain about Guyana’s readiness for such a move.
It was reported that the proposal was to have bidding rounds elsewhere in the media, with Natural Resources Minister Vickram Bharrat quoting that the rounds will take place in 2021. However, when this newspaper contacted the Minister yesterday, he said that the matter was still under discussion. The Government, he said, is expected to make a decision on the way forward, in early 2021.
Unlicensed acres are limited. All that remains at sea is the area known as Block C and the area surrendered from the Canje block by ExxonMobil in 2019.
These areas could bring a lot of revenue to Guyana. ExxonMobil expects to find 10 billion barrels of oil in the Canje block. The area surrendered by Exxon is hidden under the Canje block and is located very close to several Stabroek ExxonMobil block finds.
Block C sits atop the Canje block and east of the Kaieteur block, which is expected to hold 2.1 billion barrels.
The key to awarding oil licenses is the review of Guyana’s oil laws, the establishment of a Petroleum Commission and the production of a model Production Sharing Agreement (PSA).
Before she took over the government, the Civic Progressive Party (PPP / C) touched on plans to set up a Petroleum Commission to keep politics out of oil. The Government is yet to outline its legislative agenda for the introduction of the Petroleum Commission Bill, and other oil laws, which need urgent review.
The Petroleum (Exploration and Production) Act is over three decades old. Despite Guyana’s laws providing for competitive bidding, used in the mining sector, they are still outdated and need to be revised to keep up with modern, international best practices.
Politicians involved in the current administration had criticized the former Government for not adequately preparing Guyana for oil, especially as it had approved two field developments without modern laws.
In addition, in June last year, the then Leader of the Opposition, Dr. Bharrat Jagdeo has warned the David Granger administration not to award any new licenses until it has completed the model PSA.
This followed continued criticism of the Stabroek block PSA, signed by former Natural Resources Minister Raphael Trotman in 2016. The Minister approved the deal in dubious circumstances with provisions widely seen as less than the country’s deserved. It was later revealed that Trotman had on several occasions ignored expert advice in relation to the license award and some key financial provisions.
Jagdeo had said that the concessions given to ExxonMobil for the Stabroek block should not be given to any other oil company, which included a permanent surrender of all taxes and the right to self-insure against natural disasters.
Jagdeo is now Vice President and has yet to publicly pronounce on the promise of the People / Civic Progressive Party (PPP / C) campaign of delivering a superior model PSA.
The party had also pledged to renegotiate several petroleum deals, with the exception of Staxonek block deal ExxonMobil. Those bargains have not been renegotiated. And yet, the government is considering awarding new deals.
The PPP / C signed several deals with oil companies, more than the Granger administration did, giving away oil blocks on extremely generous terms. The most controversial of these were the Canje and Kaieteur blocs, given away by former President Donald Ramotar under dubious circumstances, just before the 2015 elections.
Any new awards made to companies that are unconditional and do not show an accurate history of petroleum exploration and development would raise large red flags.
One of the major issues, which plagued the Canje and Kaieteur blockchain awards, and still does, is beneficial ownership. The Extractive Industries Transparency Initiative (EITI) has provided a year-end deadline for the exposure of all beneficial owners, but the Irfaan Ali administration has not yet provided such a register to the public or the EITI.
The Natural Resources Governance Institute (NRGI) has said that when rights are awarded, governments should ensure that certain company information is made transparent, including who owns them. NRGI also urges governments to develop reliable and consistent mechanisms to keep track of oil block owners and other extraction licenses.
The Guyanese public has learned much from the controversial Kaieteur and Canje awards, and would expect much improvement from any new licensing process. If President Ali plans to license new blocks in 2021, he will have a lot of preparation to do in a very short time.