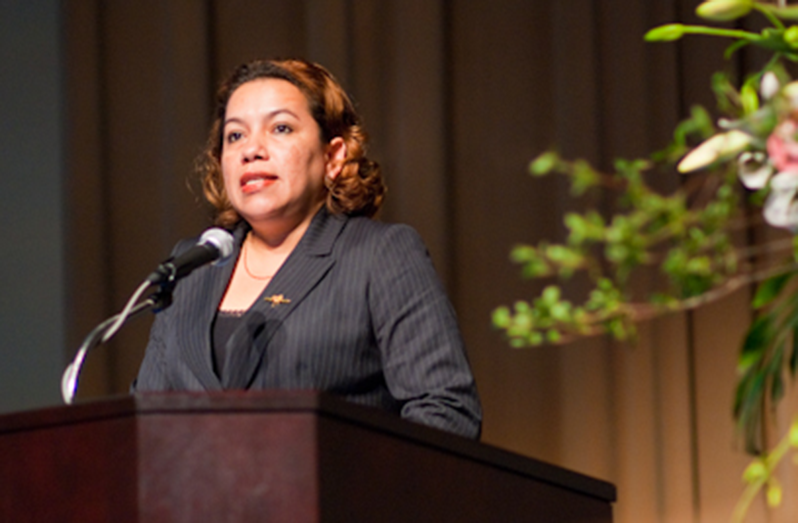 – said Rodrigues-Birkett, stressing that the automatic voting record is not final

AMID claims Guyana voted against resolution to eliminate racism, race discrimination and xenophobia, Guyana Permanent Representative to the United Nations (UN), Carolyn Rodrigues-Birkett, has stressed that Guyana was the main sponsor of the decision and that the country is supportive of it.

The title of Resolution 72/157 is “A worldwide call for decisive action for the complete elimination of racism, racial discrimination, xenophobia and related intolerance and the comprehensive implementation of the Durban Declaration and Action Program.” This resolution was adopted by the United Nations General Assembly (UN-GA) at the seventy-second session in December 2017.

In a statement issued by the Ministry of Foreign Affairs and International Cooperation Saturday night, Rodrigues-Birkett noted that some false information was circulating on social media, suggesting that Guyana had voted against this decision.

“This is completely false and cannot be further from the truth. As Guyana’s Permanent Representative to the United Nations, I want to confirm that Guyana voted in favor of the resolution when it was adopted in the General Assembly on December 31st, 2020, ”noted Rodrigues-Birkett.

In fact, the Permanent Representative underlined, “Indeed, as Chairman of G77 and China, Guyana was the main sponsor of the decision and, together with South Africa, facilitated the discussions for this Resolution in the Third Committee.”

The United Nation’s Third Committee deals with Social, humanitarian and cultural issues. According to the original resolution document on the United Nations website, as the former direct chairman of the Group of 77 (G77) and China, Guyana presented the revised draft resolution on behalf of G77 Member States and UN China during the seventy-fifth session of the Third Committee.

The statement by Rodrigues-Birkett also noted that the Decision had been presented by the representative of Guyana at the Third Committee on November 19, 2020. The Guyanese representative then reminded the Committee that 2021 would mark the 20th Anniversary of the adoption of the Durban Declaration. and Program of Action and, as such, the G77 and China had introduced significant changes to the Decision aimed at commemorating this important milestone.

The statement further noted that a Guyanese representative stated: “The Durban Declaration and Program of Action emphasizes that equality and non-discrimination are fundamental principles of international human rights and international humanitarian law and are essential in the fight against racism, racial discrimination, xenophobia and related intolerance. ”

It was highlighted that this decision contained a holistic agenda encompassing measures to improve education and awareness, to combat poverty and marginalization, and to ensure inclusive development. And, the relevance of this decision was further strengthened by the recognized link between combating racism, racial discrimination, xenophobia, and related intolerance and achieving the Sustainable Development Goals.

“The G77 and China regard the 20th anniversary of the Durban Declaration and Action Program as a valuable opportunity to improve public understanding of its comprehensive nature, and as a timely reminder to all that racism, race discrimination xenophobia and associated intolerance they have to be done. be removed, ”a Guyanese representative also noted.

Importantly, on behalf of the G77 and China, he also noted that more attention should be given to the issues affecting African-American Persons.

“The International Decade for People of African descent and the adoption of the program of activities for implementing the decade by consensus are integral to the full and effective implementation of the Durban Declaration and Action Program,” said Rodrigues-Birkett.

At the end of the statement made by a Guyanese representative, Guyana invited delegations to co-sponsor and vote in favor of this decision against racism, racial discrimination and xenophobia. The Guyana Chronicle understands that this vote was recorded from an automatic generation process but this was not the final vote made by Guyana.

“It should be noted that the automatic generation of the vote as shown on the screen in the room at the time of voting is not the last official record of the meeting,” explained the statement by Rodrigues-Birkett.

The Permanent Representative emphasized that Guyana was supportive of this decision and asked, “It must be said that Guyana, as proposer of a Resolution, would not have voted against our own decision.”

The official minutes of the voting taken at the Third Committee showed that Guyana voted in favor of this resolution. The draft resolution, as amended verbally, was adopted by 124 votes to 12, with 44 abstentions in that committee. The official voting records at the UN-GA are not yet available.