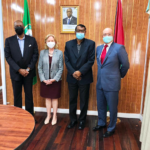 Harmon, Ramjattan begs US Ambassador to be Opposition news source

– said the local media were unhelpful in conveying a message

From left: Leader of the Opposition, Joseph Harmon; US Ambassador Sarah-Ann Lynch; AFC leader, Khemraj Ramjattan; and Deputy Head of Mission at the Embassy, ​​Mark Cullinane.

Kaieteur News – Guyana’s political opposition – the A Partnership for National Unity + Alliance For Change (APNU + AFC) coalition – believes local media has been unhelpful in conveying its message and as such, has asked the US Ambassador United States, Sarah-Ann Lynch, ferry her message to Washington, regularly.
Opposition Leader Joseph Harmon made the request last Tuesday during a meeting with the Ambassador and Deputy Head of Mission at the US Embassy, ​​Mark Cullinane.
The meeting took place in the Office of the Leader of the Opposition and saw the participation of AFC Leader Khemraj Ramjattan, according to a public missile released by the Opposition on Wednesday.
The Leader of the Opposition asked for the Opposition’s views to be conveyed to Washington on a regular basis, taking into account the fact that “a large part of the local media landscape is of no benefit to the Opposition.”
In fact, Harmon also asked Ambassador Lynch for the Opposition to be informed of any major changes to US Policy decisions on Guyana.
According to Wednesday’s APNU + AFC public statement, the meeting focused primarily on a number of issues, especially on issues of governance, parliamentary democracy and national security.
“The Leader of the Opposition shared the coalition’s views and observations on these issues, and how they broadly affect the Guyanese people and, in particular, the impact and impact of APNU + AFC on supporters.”
According to the coalition, Harmon also used the opportunity to highlight what he calls the discriminatory practices of the People / Civic Progressive Party, since taking office and highlighting “arbitrary firing of public servants, distributing grants cash COVID-19, politically motivated accusations and arbitrary arrests of individuals considered to be supporters of the Coalition, among other issues. ”
It was also reiterated, “there is a need for a spirit of consensus and co-operation and this requires putting the welfare of the country first.
In addition, the Opposition said that efforts should be made to engage in meaningful dialogue, supported by the US, “to ensure that the PPP regime does not govern in a way that marginalizes a large part of the population.”
The party also said that a copy of the summary report on “Guyana’s operational lawlessness, political persecution and ethnicity for the period August 2 to December 25, 2020, was shared with the U.S. Ambassador and Deputy Head of Mission.”
It has since committed itself to providing an updated report for the current period to be shared “within a short period of time.”