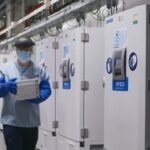 The Pfizer vaccine needs to be stored at very cold temperatures of minus 70 to 80 degrees.

Kaieteur News – Guyana could receive COVID-19 vaccines in the second quarter of the year, according to Health Minister, Dr. Frank Anthony.
The Minister said Guyana can see the arrivals sometime between April and June, however, a Ministry of Health spokeswoman told Kaieteur News yesterday that was the Minister’s estimate.

His announcement was made Monday during his appearance on Beat-The-Clock’s morning program on News-Talk Radio 103.1 FM. Dr. Anthony that Guyana could receive the first batch of vaccines during the given timeframe, but the government is not sure which of the COVID-19 vaccines will be received first.
This revealed that because the COVID-19 Global Vaccine Access Facility (COVAX) through which Guyana accesses vaccines has not identified which of the vaccines will be provided first.
COVAX facility, which includes organizations such as the World Health Organization (WHO), the Coalition for Epidemic Preparedness Innovation and GAVI – the Vaccine Alliance. COVAX was created in April with the goal of ensuring that lower-income countries acquire vaccines for at least 20 percent of their population.
“We don’t know which one we would eventually get but whatever you get will also depend on your willingness, so that’s why we’re preparing our cold chain to include anyone the vaccines that range from ‘ r -70 degrees up to +8 degrees, ”the Minister said during his interview.
Notably, the Ministry of Health has been preparing cold storage facilities for the vaccines since December last year. Dr. Anthony has indicated that the facilities will be ready by mid January this year.
Storage facilities needed to be established as the vaccines have specific storage temperature requirements.
So far Guyana is about to receive two types of vaccine; the Moderna vaccine and the Pfizer-BioNtech vaccine from two US drug companies.
It was reported that the Moderna vaccine could be stored in a standard refrigerator with temperatures of 2 to 8 degrees Celsius (36 degrees to 46 degrees Fahrenheit) for a period of 30 days. However, the Pfizer vaccine needs to be stored at very cold temperatures of minus 70 to 80 degrees requiring cold storage freezers that the Ministry has taken steps to procure.
Kaieteur News learned that the Pfizer BioNTech vaccine has been approved for emergency use in the Caribbean by the WHO and is already in the COVAX Facility. In light of this, countries in the region are preparing for vaccine introduction.