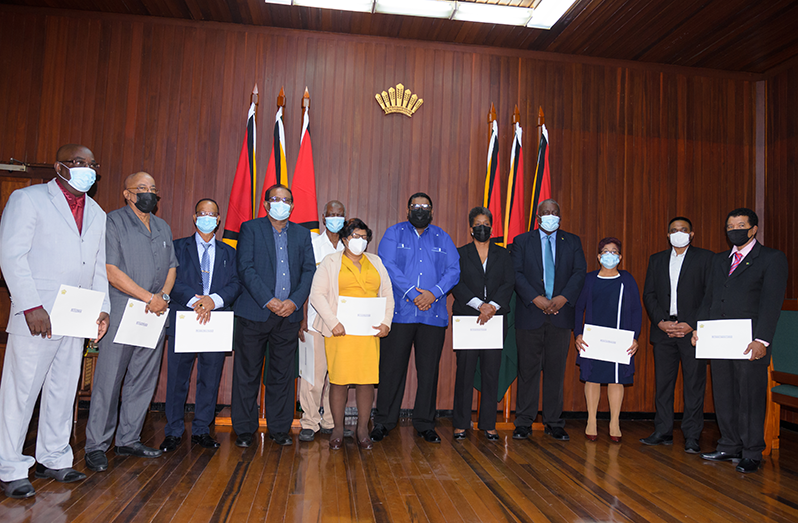 – as the economy continues to grow, President Ali tells the new members of the Local Government Commission

By Navendra Seoraj
DRIVEN by continued growth in key productive sectors, Guyana’s economy will, over the next decade, be transformed economically and socially, the benefits of which local government bodies will play a greater role in the effective and efficient administration , said the President, Dr. Irfaan Ali.
Experts believe that effective economic transformation requires prudent management at all levels, so that there would be not only better use of resources, but also a fair distribution of benefits, especially at a community level.

“Guyana’s continued economic development over the next decade is expected to bring about economic transformation, but, importantly, economic and social transformation at all levels of society, local government organs play a vital role in ensuring that transformation is administratively administered. efficient and effective, ”President Ali said following a swearing-in ceremony for members of the Local Government Commission, at the President’s Office, on Monday.

Under the Local Government Commission Act, the commission will consist of eight members: three appointed by the President acting in accordance with his own deliberate judgment and three members appointed by the President acting on the advice of the Leader of the Opposition , after consulting other parliamentary parties.
For the latter, the Minister for Parliamentary Affairs and Governance, Gail Teixeira, by correspondence, engaged the Leader of the Opposition, Joseph Harmon, who introduced the names of Trotman, Romascindo and Corlette.

Furthermore, one member shall be appointed by the Presiding Officer after approval by the National Assembly on nomination by the Parliamentary Standing Committee on Appointments by persons represented by trade unions within the local government system, and one appointed by the Minister for Local Government after consultation with local democratic organs.
The commission’s Chair and Deputy Chair are selected from the commissioners following an internal process; this process is likely to be done at the first meeting of the eight-member commission.

The commission’s mandate is expressly dictated by the Constitution of the Cooperative Republic of Guyana, which, in Article 78 (a) states: “Parliament shall establish a Local Government Commission, the constitution and the rules that empower the commission to deal with it as it considers well, issues relating to the regulation and staffing of local government organs, and with the resolution of disputes within and between local government organs. ”

Although the commission’s role remains largely the same, President Ali has said: “I wish you all success in doing so, I want to re-emphasize the point that as development expands its However, as our budget allocations expand, there will be increased levels of responsibility. impose on local government bodies.
“There will be bigger budgets and more need for better oversight, professionalism, accountability not only to the Auditor General for funding but importantly, accountability to the people, who you all serve.”

President Ali confirmed that development was first and foremost about improving people’s livelihoods. And, the Executive’s intention is that the development of the forthcoming country is balanced and more importantly, protected at all levels of society: at the national level, at the regional levels, and at the community level.
“In order to guarantee such an outcome, it is vital that we establish efficient and effective local government organs to provide better wellbeing for citizens, especially in our towns, villages and communities.

“The Government formulates policies to implement local development, and appreciates the important role the Local Government Commission can play in ensuring that its policies and programs are not delayed by impediment, implementation. poor professionalism, absence of professionalism and by disputes between and within local government bodies, ”said the Head of State.

Pledging his support to the commission, President Ali said: “I can assure you of the support of my administration and my personal guarantee that there will be no attempt to interfere or interfere with the exercise of your function, set out under the Constitution and the Government Commission Local The law is tolerated. ”