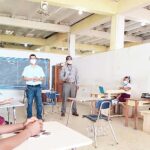 Kaieteur News – With schools now reopening for the Easter Term following its short closure for the 2020 Christmas holiday season, hinterland regions have recorded low numbers of students voting for physical classes. This is according to the Deputy Chief Education Officer (DCEO) for Amerindian and Hinterland Education Development, Marti DeSouza, who spoke to Kaieteur News last Friday.
Schools re-opened for virtual and face-to-face learning across the country last Monday and while the face-to-face interaction has been going “smoothly”, the DCEO said various factors associated with the COVID-19 pandemic have prevented a better student. eviction. DeSouza said fear was one of the major contributing factors. In this regard, the officer noted that several teachers, in Region One (Barima-Waini), had tested positive for the virus which resulted in parents being reluctant to send their children back to the classroom.
DeSouza further noted that, at the beginning of the week, turnout was less than 50 percent. The officer noted however that there had been an improvement as the week drew to a close. He revealed that Region Nine (Upper Takatu – Upper Essequibo) recorded the highest student attendance compared to other regions while adding that this may be related to the fact that the region has been able to contain the spread of the virus as there is less cases are being reported.
The DCEO noted that while turnout was low, home-based students are still employed through the Ministry of Education and continuously distributed worksheets. The Education Officer also revealed that there is a new initiative being initiated by the Ministry, to link virtually all hinterland secondary schools for additional learning. “Face-to-face interaction is going smoothly; however, plans are afoot to link virtually all Secondary schools, especially for the dormitory students who have access to the school WiFi, ”the DCEO told this publication.
“Grades 10 and 11 students live in the dorm, but because of the learning loss experienced, we are trying to make amends through virtual,” he said further.
Kaieteur News understands that sessions would be held each weekend using the ZOOM application and will provide students with additional learning lessons. He revealed that a trial run was held on Saturday with students from schools in Region One, including Moruca, Port Kaituma and Santa Rosa.
He also noted that he is currently in the region assessing the condition of the computer laboratories to ensure they are fully operational.
In addition, the officer shared that students who do not have WiFi will have to use mobile data to participate in the DCEO learning lessons. He said that while unfortunate, mobile data can be expensive and the Ministry is continually working to assist in this regard.
The officer shared another solution, which is to get students to use the learning resource centers located in the hinterland. He said that if the centers have fixed internet access, students can go there for their additional learning lessons with the understanding that social isolation protocols must be maintained.