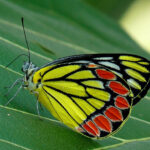 Kaieteur News – The Pieridae is a large family of butterflies with about 76 genera containing about 1,100 species, mainly from tropical Africa and tropical Asia with some varieties in the more northern regions of North America. https://en.wikipedia.org/wiki/Pieridae – cite_note-eob-1 Most pierid butterflies are white, yellow or orange in color, often with black spots. The pigments that give these butterflies a certain color are derived from waste products in the body and are typical of this family. The family was created by William John Swainson in 1820.
The name “butterfly” is thought to be derived from a member of this brumstone family, Gonepteryx rhamni, known as the “butter-colored feather” by early British naturalists.
The sexes are usually different, often in the pattern or number of black marks.
The larvae (caterpillars) of some of these species, such as Pieris brassicae and Pieris rapae, commonly found in gardens, feed on cabbages, and are notorious agricultural pests.
Males of many species show muddy muddy behavior when they can suppress salts from moist soils.
The Pieridae has the radial vein on the forehead with three or four branches and rarely with five branches. The tailings are well developed in both sexes, unlike the Nymphalidae, and the tarsal claws are bifid, unlike the Papilionidae.
Like the Papilionidae, silkworms also hold their pups at an angle from a silk belt, but run in the first abdominal segment, unlike the thoracic girdle seen in the Papilionidae. But some species such as the madrone butterfly belonging to this family do not show the presence of this abdominal silk belt.
The Pieridae are generally divided into these four subfamilies:
Dismorphiinae (six genera), mostly Neotropical; this group contains several mimic species. The host plants are in the Fabaceae family.
Pierinae (55 genera), white, yellows, and orange tips; many of these species are strongly migratory. Host plants are in the families Capparidaceae, Brassicaceae, Santalaceae, and Loranthaceae.
Coliadinae (14 genera), sulfurs or yellows; many of these species are sexually dimorphic. Some, like Colias, have wing patterns that can only be seen under ultraviolet.
Pseudopontiinae contains only the genus Pseudopontia, which was previously considered monotypic. Its type species – formerly the only species in this substrate – Pseudopontia paradoxa, is endemic to West Africa.
According to the molecular phylogenetic study of Braby et al. (2005), sister-group relationships among Pieridae subfamilies are ((Dismorphiinae + Pseudopontiinae) + (Coliadinae + Pierinae)). (Source: Wikipedia)