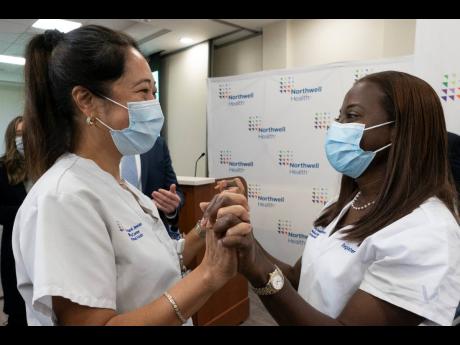 (Jamaica Gleaner) The Jamaican nurse who made history by becoming the first person in the United States to receive the COVID-19 vaccine is urging her compatriots to get the life-saving injection to shield them from the virus that has almost infected 73 million people worldwide and 1.6 million killed.

Sandra Lindsay, who works in the Intensive Care Unit at Long Island Jewish Medical Hospital in New York, joined in the applause shortly after the first dose was injected into her arm on Monday.

Amid mounting skepticism over the effectiveness of the COVID-19 vaccine, Lindsay has urged Jamaicans to listen to the scientists and ignore conspiracy theories that could thwart attempts to vaccinate the population.

“My hope is that this is the beginning of the end of the pandemic. I’ve seen what he’s done and what he’s doing for our people, and just wants it to be over, ”Lindsay told The Gleaner hours after taking the injection.

“Hopefully, when the vaccine becomes available to Jamaicans, they will seize the opportunity to take the vaccine. It’s safe, and I’m confident it will bring relief, ”added the Glenmuir High alumna.

Lindsay’s advice comes in the wake of Gleaner’s report on Monday indicating that many frontline healthcare staff, including doctors, nurses, porters, babysitters, and others, were not prepared to receive the injection as a buffer against the virus, which has killed 273 people locally and infected nearly 11,800.

Negative acceptance could lead to the Holness administration’s plan to vaccinate 450,000 Jamaicans, about 16 percent of the population.

Lindsay, a critical care nurse for more than 20 years, first working at Lenox Hill Hospital and for the past four and a half years at Long Island Jewish Medical Hospital, said she longed to be shot after seeing herself suffering and pain which COVID-19 has caused in New York.

“I was not pressured or paid to take it. I volunteered to take it because I wanted to end this pandemic, ”he said.

New York Mayor Bill DeBlasio said it was fitting that Lindsay, 52, was the first to get the shot and Governor Andrew Cuomo said he felt hopeful and relieved.

“I feel the healing is coming. I hope this marks the beginning of the end of a very painful time in our history, ”said Lindsay, who has been at the forefront of the fight against the coronavirus that has claimed the lives of nearly 300,000 Americans and infected more than 16 million people nationwide.

Born in Clarendon, Lindsay immigrated to the United States more than 30 years ago to pursue her nursing career after graduating from high school. She is an MBA holder from Hofstra University and is currently pursuing a doctorate.

The Food and Drug Administration (FDA) gave urgent approval last Friday to the vaccine developed by German company BioNTech and its US partner Pfizer. Consignments began to be delivered throughout the United States for administration starting Monday.

For healthcare workers, who, along with nursing home residents, will be the first to be vaccinated, hope is tempered by the complete grief and exhaustion of months spent battling a still-rising coronavirus in the US and worldwide.

Jamaican Dr Robert Clarke, who has been on the front line in the fight against COVID-19 in New Jersey, told The Gleaner that he is slated to get the vaccine later this week when the first batch arrives at his hospital in East Orange, New Jersey.

“I’m on the front line and among the first group to be vaccinated when it comes to hospital. Hopefully this happens later this week, ”he said.

Clarke said he is optimistic about the vaccine’s hope.

“It can’t come soon enough. I’m looking forward to it, and everyone should have the vaccine when it’s available to them, ”he said.

Dr Michael Morgan, another Jamaican on the frontline in the fight against the coronavirus, said he did not know when he would get the vaccine.

Morgan said he wanted to review the data on the vaccine, but suggested a different target group for its introduction than what is accepted in global medical orthodoxy.

“I think the vaccine should be given to the public first, because they are the ones who come into hospitals with the virus,” he chose.

The barrier now is getting the vaccine to the arms of millions quickly, not just doctors and nurses, but other at-risk health workers such as porters and food handlers – and then delivering a second dose three weeks later.

Still, while gaining approval for widespread emergency use, the vaccine was cleared before a final study in nearly 44,000 people was completed. That research continues to try to answer additional questions.

The shots must still be studied in children and during pregnancy. But the American College of Obstetricians and Gynecologists said Sunday that vaccination should not be stopped from pregnant women who would otherwise qualify.

In addition, regulators in Britain are investigating a few serious allergic reactions.

The FDA instructed providers not to administer the vaccine to those with a known history of severe allergic reactions to any of its ingredients.