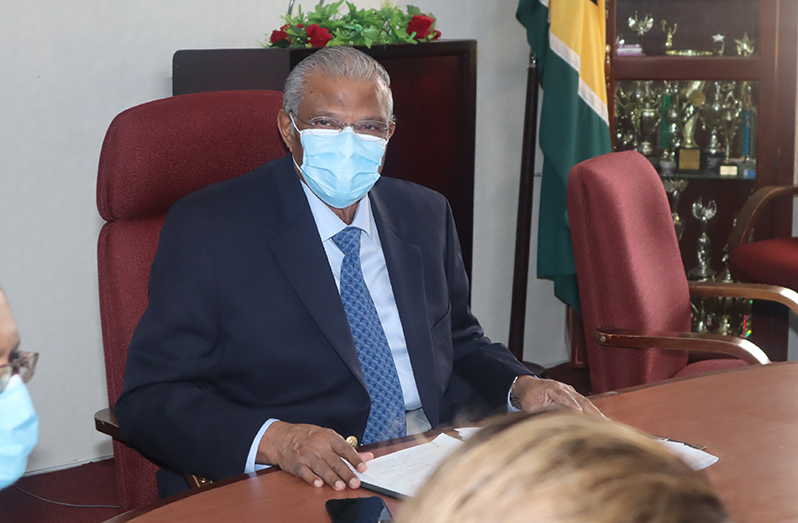 – a new board to develop programs to promote the coconut, bioethanol, mangroves industry

AGRICULTURE Minister Zulfikar Mustapha has officially established members of the Board of Directors of the National Agricultural Research and Extension Institute (NAREI).
The new board members, who will serve in this capacity for a year, were encouraged to work together to lay the foundation to take the agency to the next level.
Commenting, Minister Mustapha said that the board is expected to develop programs that are in line with Government policies, as outlined in his 2020-2025 Manifesto.
“Some of those policies are to create a complementary environment for the development of other crops, promoting the diversification of agriculture with a focus on coconuts and horticulture. NAREI is also tasked with promoting the agri-energy industry; production of bioethanol through palm oil, cassava and corn. I recently had a discussion with the chairman about palm oil in Region One, and I have asked him to prepare a program for the ministry, so that we can see the kind of funding needed for that, ”said Minister Mustapha .

The board was also tasked with developing guidelines to expand imported substitute crops, as well as soybeans, corn and other crops in the hinterland savannahs. The subject minister noted that incentives in the soybean and corn industry were given in last year’s emergency budget, and that the board should work to promote the growth of these two crops.
In addition, Minister Mustapha urged the board to pay special attention to developing strategies to boost Guyana’s coconut industry.
“You know for a fact that our coconut industry is about to start, and we’ve been putting a lot of emphasis on its success and development. We have had a budget allocation last year to develop two new coconut nurseries, and this year we are offering seven additional nurseries for other areas across the country. We are optimistic that those projects will be approved by the Ministry of Finance, so that we can start building these nurseries. The coconut industry, to me, is probably the third most important crop in our country, and has the potential to be a very big foreign exchange winner for Guyana. We have also made great progress in joining the International Coconut Community (ICC), ”said Minister Mustapha.
Chairman of the newly appointed Board, Major General (Ret’d) Joe Singh, in commenting, said the board will work together to address the areas identified by Minister Mustapha .

COMBINED OUTLINE
“The minister has given us a very comprehensive outline of his and Cabinet’s expectations of the board, and a reference on what are considered priorities as it relates to the NAREI mandate. Not only do we expect to be sitting in a boardroom, but we will also be visiting other areas around the country. In this way, we will be able to see the results of NAREI’s research, as well as interact with farmers. I would like us to think from a national perspective; how what we do as a board not only supports, tasks and monitors what NAREI does, but what we can bring to the table. I don’t expect people to just be rubber stamps, ”says Singh.
The chairman further stated that there are a number of outstanding issues that the board will address during their statutory meetings.
The board was also tasked with leading NAREI on ways to expand training, and its outreach capabilities. Minister Mustapha stressed the importance of making NAREI extension officers more responsive to farmers’ needs. He further said that one of the major challenges in research in Guyana is getting the technology to farmers.
“Our outreach officers need to become more involved with farmers’ groups to assist in setting up demonstration plots, and to give more emphasis to the dissemination of agricultural technology to these groups.

There is also a need for some work aimed at protecting plants. During the ministerial visit to Suriname last year, I had discussions with the Surinamese authorities, and we will have corporate areas in which NAREI will have to play a very important role. I know that we have made some progress in this regard with diseases found in Suriname and Brazil, and I think at board level, these issues have to be looked at very closely, ”he said r Minister Mustapha.
The board was also asked to pay close attention to the development and implementation of the mangrove development plan for 2021-2025. Minister Mustapha urged the new board to develop a program to lead the Government’s five-year strategic plan for strengthening Guyana’s sea defenses by integrating mangroves, including carrying out mangrove replanting exercises in vulnerable areas across the coast.
New members of the NAREI Board of Directors include Major General (Ret’d) Joe Singh (Chairman); Dindyal Permaul; Anjanie Narine; Andrew Forsythe; Natasha Beerjit-Deonarine; Bibi Shadick; Jainarine Narine; Suresh Amichand; Seeraj Pooran; Ricky Roopchand; Christopher Vandeyar; Garvin Cummings; Porandatt Narine; Raymond Ramsaroop; and Dr. Oudho Homenauth (Ex officio).