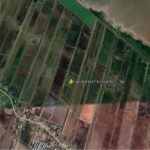 Proposed site for the facility.

Kaieteur News – Aware of the country’s desperate need for shoreline facilities needed for the rapidly developing oil sector, John Fernandes Limited has decided to approach the Environmental Protection Agency (EPA) ) to construct a 5,000 square meter storage and transfer facility. .
According to the project document examined by Kaieteur News, the proposed facility is expected to be built at Plantation Fairfield, Mahaicony, East Coast Demerara. It is used strictly for storing products and equipment, repackaging products to tanks, filtering products as they repackage, controlling the quality of filtration, and transporting the inventory to the supply ship.
The document goes on to state that finished products imported from the United States would be brought into Georgetown, Guyana and once cleared from customs, would be transferred to the proposed site where most of the products are filtered as they are transferred to internationally approved shipping containers. through a closed-loop system to eliminate vapor emissions. The developer, who is listed as Zach Gonsalves, said oilfield materials would be stored in these containers at the proposed site until needed offshore.
Upon receipt of the project summary, the EPA has requested additional information specific to the containers containing the type of chemicals that would be stored along with the composition and capacity of the containers.
Kaieteur News understands the company plans to store materials such as asphaltene inhibitor, corrosion inhibitor, biocide, biocide filter, hydrate inhibitor, demulsifier, chlorine scavenger, defoamer and hydrate inhibitor. The product will be stored in stainless steel tanks and certified by the International Organization for Standardization (ISO). The Fernandes Group was keen to point out that material compatibility, material-specific gravity, vapor pressure, and flash point are key elements that feed into the decision on the type of container selected and used for transportation and storage as well. with the weight of filling the material. .
The company has said it plans to comply with UN package performance standards to ensure safety and regulatory compliance with laws and regulations.

GUYANA MUST PREPARE
Earlier this year, former Trinidad and Tobago Energy Minister Kevin Ramnarine warned during an exclusive interview with Kaieteur News that Guyana needs to increase its preparedness to meet oil sector demands or it will be dampened. Unfortunately, Guyana has already found itself faced with this raw reality as it is unable to meet the needs of the Liza Phase One Project using the Liza Destiny oil ship.
A further five oil development projects are expected to join by 2026. These projects will also have floating production storage and offloading (FPSO) boats loading the oil for sale and will require the services of seafront facilities. Along with the operating Liza Destiny, there are four drill ships and approximately 25 support ships operating in the Guyana basin.
A former TT minister had recalled that international consulting firm and trusted data provider Wood Mackenzie had said that Guyana would soon become the 11th nation in world history to produce over one million barrels of oil a day. With this in mind, he said Guyana must prepare its industry to have sound institutional capacity and legislation. He acknowledged that the Department of Energy had made some moves in this direction but at the same time noted that it should have been in operation since 2015. “The country is therefore slightly behind the curve at this time,” says the business studies lecturer.
Ramnarine also said it is vital that Guyana does not find itself in a place where the industry is growing exponentially but the ability to control it does not. He said this was one of the blunders that made his homeland while adding that Guyana had the good fortune of having borrowed experience as it sought to do better.