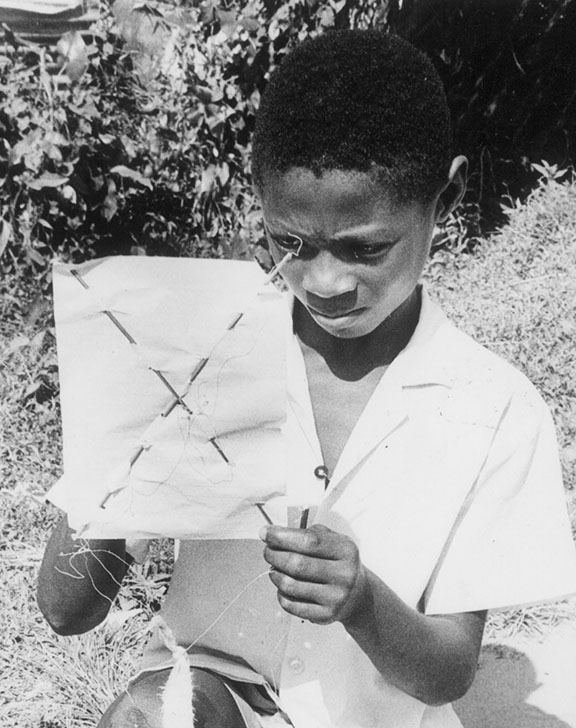 Every Easter Monday the sky comes alive in a burst of color and sound as Guyanese flock to all open spaces with their kites to join in the annual kite flying activity. While some in the local Christian community use this celebration to commemorate the ascension of Christ, kite flying is more of a cultural than religious activity with individuals from all religious backgrounds participating in it and contributing their own unique flair to the activity.

The Europeans may have brought Christianity to the Caribbean, but the kite itself has a history that goes back millennia to ancient China. Kite-making and kite-flying for some is a serious activity that requires thoughtful consideration; every flyer needs a perfect kite of the perfect color and size that can ‘sing’ in the perfect pitch. There is no such thing as a standard kite; everything about kite is individual. Anyone looking at the spectacular variations of color, sizes and shapes that adorn the skies on Easter Monday does not doubt that much time and effort can go into finding that perfect kite.

One time the singing engine was made perfectly at home; the little ones sat at their father’s feet as he made their special kite with their favorite colors, while older children competed to make the fastest flying kite, the loudest singing or the fierce kite fight. It was a time when the kite-making season saw children remove the leaves from their exercise books and pinch ‘tips’ from their mother’s pointer sweep to do what they called ‘punch caddy’. They rated the gamma cherry trees for its sticky produce that proliferated during Lent season, and piloted the flour bin if needed – flour paste is known to help kite paper stick. Today kite making is a commercial rather than family activity with adults and children buying their kites that were often made by dealers nationwide.

Despite the increasing use of the China-made ‘bird’ kite, making Guyanese kite making is still a lucrative business. One such is Marvin Cole of Buxton.

Like many others, Cole learned to make a kite at his father’s feet. Every year he watched his father Emmanuel Cole, make kites for him and his brothers and sisters, but when his father emigrated in 1986 he had to find his own kite. His aunt tried to fill the gap by buying a ‘bird’ kite but that didn’t go well when a bone fell out and that year, he said, they didn’t get Easter.

The next year he saved his Mashramani money and not just made one kite but several, using ‘pointer’ frames. These kites were so popular that his neighbors started asking him to visit their homes to help them. In 1989, he

and his brother with the help of community member Ray, framed and designed 20 kites that sold out in 3 hours.

Recognizing that he stumbled upon a niche market, Cole set up shop in the village. He sold $ 85,000 worth of kites in 1990. Every year since he did a brisk business, demand always seems to outstrip supply, because no matter how many kites he makes he never seems to enough. Noting that in recent years people seem to be scared of Buxton, Cole moved his business onto the public road to even greater success, netting $ 1.2 million in 2014.

Its customer base extends as far as Linden to the west, Suriname to the east and Canada and the US to the north. Along

with the walk-in and drive-in business, Cole fulfills several custom orders throughout the year. He has already taken an order to provide 50 kites this Monday, and last Christmas he posted kites to Canada.

Cole acknowledges that many of his customers do not have the skill to make their own kites, instead they may not have the patience required to paste them. They may also be hampered by the cost of individual materials, he feels, as the price for materials can add up. Access to the materials and time needed to design and transport the kite makes buying one a better investment for many.

Several customers even go to Cole where they use his products to transport their own kites or watch him as he makes their kites to their specifications. He notes that he is never too impatient to make the customer satisfied.

Cole attributes his success to a loyal customer base and world-class product. Anyone who buys Cole’s kite is “guaranteed to fly,” he said. Unlike the kite paper from Barbados used by kite makers in Georgetown, its kites are made from plastic kite paper imported from Trinidad that can survive the harsher handling of some of its more enthusiastic younger customers.

He notes that with increasing demand, requests for specialized styles have come. He and his staff usually take the time necessary to fit fitness among others ‘Star Points’, ‘Hassaback Diamonds’, ‘Round the World’ (all kite names) and starred kites and birds specially fitted for its young female customers. It is ready to meet any customer challenge, such as making 50 box kites for the first time in 2014.

Along with diversity, the increasing demand has caused it to extend its staff to 20 people; all villagers. From the man who makes the frame, the girl who grooves them and the young men who sit with him on the road during the day and sometimes all night passing, everyone is Buxtonian . As he says, “This is Buxton’s thing. This is Buxton’s creation … We can be creative and support our own at the same time. ”

Like any truly community businessman, he routinely donates his product to village schools, churches or other community groups who may need it.