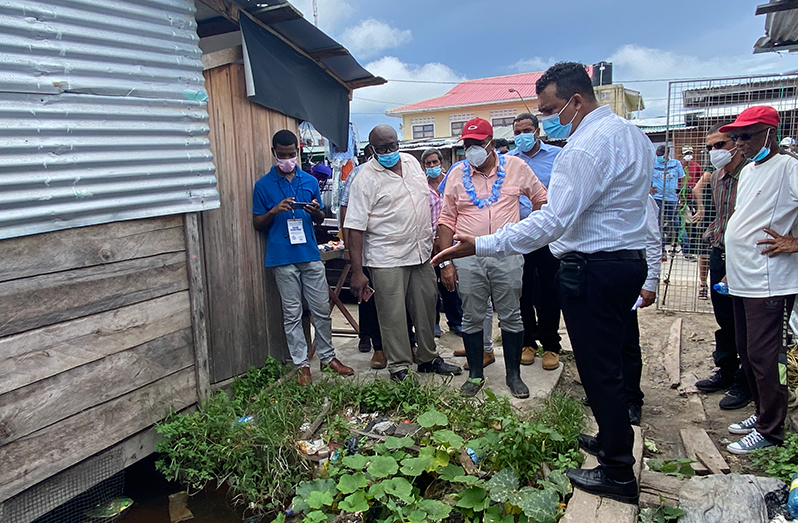 PRIME Minister Mark Phillips, describing the garbage situation at Charity as worrying, said on Tuesday that the collaborative efforts of central government, the Regional Democratic Council (RDC) and the Neighborhood Democratic Council will be required (NDC) can find a long-term solution. He made these remarks during a walk with Agriculture Minister Zulfikar Mustapha and a team of technical and regional officials in the Region Two community, who have been affected by flooding since Boxing Day. Among the places visited were the squat area, the market and the under-utilized market tarmac. The team noticed that vendors had erected their stalls over the drainage system. In addition to this illegal selling practice, a pile of garbage blocks the drains.

“A lot of junk has built up over the years around Charity. We from government expect the GDC, RDC and central government to work together on a long-term project to fix this … I learned that the situation will remain the same whenever it is raining … With proper engineering work and support from central government, this can do it. be stable, ”PM Phillips noted. At present, over 20 vendors are selling over the drainage system and have been accused of dumping trash into the drains. While the Ursara Charity / CDC has been paying employees to clean the area, the water remains stagnant due to the blockage. The odor emanating from the drains is also intolerable to shoppers and those living nearby.

According to Regional Chairman Vilma De Silva, the junk situation at Charity is an eyesore and on many occasions, the RDC and CDC have tried to fix it but have been unsuccessful. He explained that the stall owners were reluctant to move to the wide tarmac area. Once the sellers take spots there, the relevant authorities would be able to clean the drain, and make sure it flows freely and without junk. Devanand Ramdatt, Regional Executive Officer (REO) who was part of the team, expressed dissatisfaction with the behavior of the vendors. He said that while the regional administration is spending thousands of dollars on fuel to operate the pump, residents and dealers need to play their part by ensuring junk is properly disposed of.

This newspaper understands that those stall owners received movement notices from the CDC years ago, but refused to move. When this newspaper interviewed a few of the stall owners, they defended their decision to remain in the current location. According to them, there will be more sales ahead of the market than on the tarmac. “We like to be in front. The sales [are]

here. The tarmac is behind … too much walking distance for customers. When you’re in front of it, people come buy what they want and are gone. They wouldn’t want to come back to the back to look for an item, ”said Shelia Thomas, a salesman. Another seller, John Abrams, said he had been selling in the area for over 15 years. He also noted that sales were greater at the front than at the rear where the tarmac is.

“I’m selling provision. There are so many other vendors like me. A customer comes, you sell, they are gone. If I go to the back then, do you think a customer is going to look for me? We have a family to feed so we need to keep up with business and location is important, ”said Abrams. The vendors said they can cooperate with stakeholders; however, they must be provided with an incentive before they move to facilitate the clearance process. “When they move us, we’ll be out of a job, we’ll be home. The pandemic is here, we need to feed our family … Where will we find food for the table if they want to move us then? Pay us for the time we will be home until the drainage works [done] and then we’ll come back, ”said another vendor.