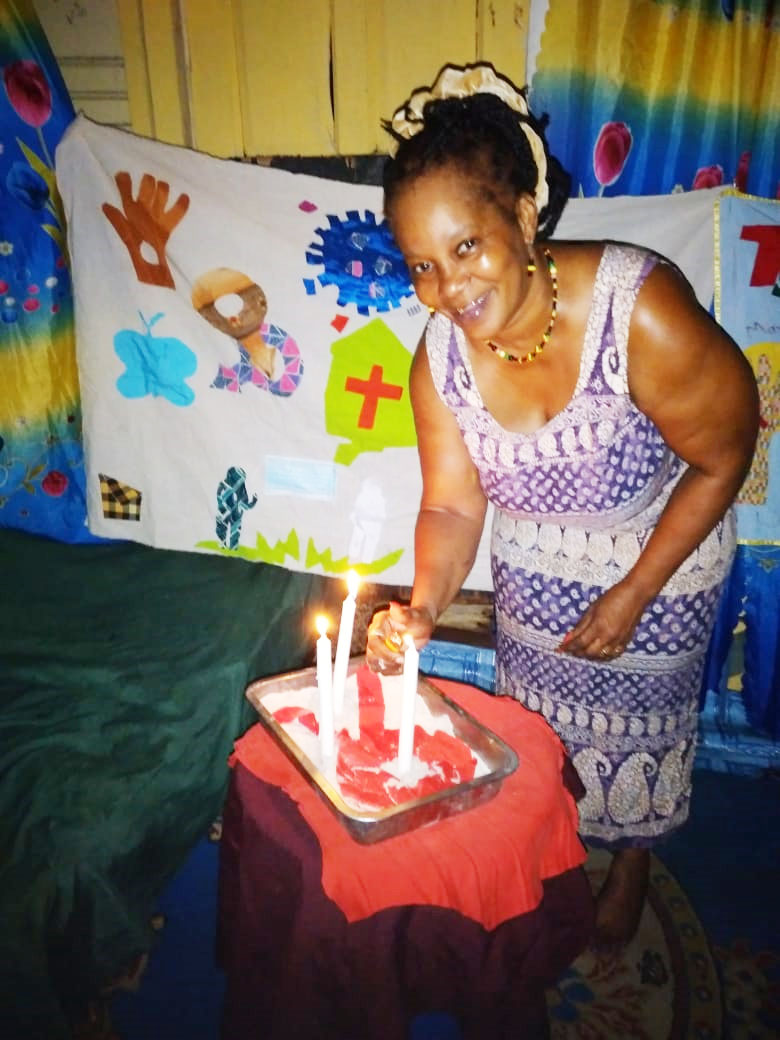 “For 19 years I have been living with HIV and I see the good and the bad in people. … Friends do more for me than family and I have to thank God because He keeps me, ”a mother of four told me in a recent conversation.

“But you see with this coronavirus, things are getting worse for me because my partner is dying and I’m being put out of the house and I really had nowhere to go. I move in with a relative but then, you know, the whole discrimination thing, she put me out and I had nowhere to go. But thank God is a friend who is now helping me. ”

Her statement underlined the double whammy that the COVID-19 pandemic has dealt with people living with HIV. They are more vulnerable to the virus because of their already weakened immune system and many fear going out but staying home is not an option.

“Is place now trying to get it. Thank God I’m getting a lil job and I’m drawing a salary. It’s hard, yes, but what can I do? I have to try to live. Once I have a life I have to try to live somehow. With this corona now, I’m not going anywhere, from work being my home because I don’t want to contract that because to me it’s more deadly than HIV. I have to go to work, so I always clean and wear a mask, ”he continued.

“Before the coronation, I used to go out a little but now it helps tap a little and I’m saving a little more and it’s a good thing because I need the money because right now I have to for me to look for a place. Look, if I think of everything that happens to me, I’d get depressed. But I can’t let that happen because what will that do? I am not ready to die, so I have to do everything I can to stay alive.

“I’m on treatment and thank God even though this corona is still getting me medications and so on and I’m just trying to budget myself,” he added purposefully.

It’s nearly 17 years since she was diagnosed with HIV positive, but she believes she caught the virus 19 years ago.

“Is someone I meet, and you know I have two children and I’m saying maybe this is the one I could start a life for myself and just live happily. We start living together and I am getting pregnant and I had my first child [for him].

“But you know in that time you didn’t have to do the HIV test when you were pregnant, so the baby was born, and I think everything is fine. But is when I get pregnant with the second child because it’s there I have to find out because I had to do the test.

“You see the day when I find out I’m breaking down and crying, and crying. I feel so hurt and thought it was me, but I get some counseling from the nurse and then I went home. They tell me I would have to use medicine because you know by then that I’ve gone that far. But at first I didn’t want to use it because I didn’t tell my dad anything and I didn’t want him to find out, so I didn’t take it, ”he shared. I asked her why she didn’t tell her husband at the time about his positive status.

“Well I thought he’d give it to me, but I didn’t want it when I told him he would say if I have it and I’m giving it to him. But deep down I know he is what gives me.

“I get to confirm this when lil after he gets really ill; like he was coughing and spitting blood and so did I know he had TB. He had to go to the doctor and when they tell him he has to take an HIV test he admits he already knew he had it, but he didn’t want to tell me anything. The people talk to him very loudly and say he shouldn’t do it because now not only do I get it but he and everyone could have it, ”he remembered.

“We are both starting to take the medicine but it just went too far, and it didn’t really help. It’s getting more and more sick and I think maybe it’s because of the way I treat it too, because I got so tired and I’m thinking about my child that I’m feeding on the breast and I was sure she got it and the thing had me so bad that I couldn’t handle it being good.

“He died soon after and I forgive him and so but that’s it. Life is getting harder for me because his family makes sure I have to move out of the house we live in. Even on the skill, they tell people he died of AIDS and I had to tell him to stop it because you know people would say if he had it, he I have that and status is not for them to tell people about me, ”he said angry.

“And when she died I had to deal with whether my daughter got it or not, because I know the second child wouldn’t get it because I wasn’t breastfeeding and they gave the mum – child to him [prevention] medicine.

“After he dies I get up with someone else. I meet him in the support group and he had it too. One day I notice things coming out on my daughter’s skin and I had to carry it for a test and it comes back positive. I start crying, and she asks me why I’m crying but I couldn’t tell her anything, I didn’t know what to say.

“Thats when we get home and I tell my fiancée that he’s sitting down and telling her. She did little so she didn’t cry or anything, but she tells us not to tell anyone. She starts to use the liquid medicine and thank God she never gets sick or just when she gets big she would tell me she wishes she hadn’t.

“Now she lives with someone who was born with him too and she works and goes to college, so she’s doing well for herself. I’m sure she’s having bad days but I’m still grateful that she’s trying to live this life and make the most of it, ”she shared.

“And things went well for me, you know. I was living with my fiancé. It really helps me and my two younger kids out a lot. My two big kids, well they are big and move on. It was me, he and I lived when he is now getting sick. He used to shout about this pain in his stomach and then I don’t know if it’s heart or something giving out but he’s dead. He was older than me, but not that he was getting sick with sore skin, or that he was getting fine or more; he was just dead.

“Again I had to move out because it was a family house we used to live in and as soon as he died the family said I had to move. I try to get lil accommodation from one of my relatives, but she tells me I have to move out and now a friend is keeping me until I find somewhere to rent . Thank God for my job.

“I told them about siblings after I knew my status and I could tell you all that they were discriminating against me. Sometimes when you go by they would put something into cups and sanitary plates and they didn’t even want you. So I’m not going any more.

“I want people to know that they have to not discriminate against people like me because we are human just like you. And sometimes, the same people you are discriminating against have to turn around and help you. I tell you, I had a neighbor who used to torture me, telling me how I get AIDS and you know she’s getting sick and it’s me who has to turn around and help her, cleanse her and so until she dies. So people have to treat other people better.

“And people with HIV have to try to look after themselves, take your medicine and stick to it. Only you can help you live, ”he said.

Individuals living with HIV / AIDS who experience difficulties during this pandemic may formally contact the Empire Plus Network with the Guyana Women and Girls Community Living with HIV (GCWAG) on 6932817.

Head of the network, Marlyn Cameron, said that although they are not physically able to meet as it was before COVID-19, it does try to provide support in whatever form it can even if it only directs people who are this is depression and counseling.

“Many of the calls I get from people who get depressed because the corona makes it so much harder for them; many of them don’t even have things to eat, ”he said sadly.

He stressed the importance of family members supporting those living with HIV and called for more education so that people could understand more about the virus.

“Many family members don’t understand what HIV is so they stigmatize people,” he added.

“But I want to tell them to be kind, those people need love too. We can all do our bit, ”said Cameron.

The next Women Chronicles column will be published on January 10, 2020. Happy holidays and remember to stay safe.