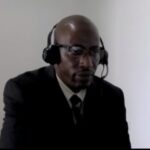 Mahaica man tells court before he gets 56 years for murder

The only thing is that I love women …

Kaieteur News – Yesterday a 50-year-old man, who was tried and convicted of murder by a 12-member mixed jury in the High Court, was jailed for 56 years.
Foster Gravesande, a father of three from Mahaica, East Coast Demerara, will be eligible for parole after serving 28 years in prison. The sentence was imposed by Justice Navindra Singh, after submitting a probation report.
Gravesande’s trial ended last December when he was convicted of murdering his neighbor, Courtney Porter. The incident happened on April 9, 2017. Gravesande allegedly beat Porter with wood over an alleged altercation the man (Porter) had with his wife.
During the case, Gravesande claimed he was not guilty of the crime.

Before the sentencing, Gravesande’s lawyer, Dexter Todd, appealed to the court for leniency.
He asked the judge to consider that his client had a clean criminal record prior to the incident; he is a bread winner for his family and an active contributor to community development. The lawyer left the court for mercy claiming that his client had the greatest remorse for what he had done.
Todd asked the court to consider that his client had been a model citizen before the incident and a model prisoner during his imprisonment awaiting trial.
“If given the chance, he is most likely to be resettled and returned to society to make meaningful contributions,” the lawyer added in his presentation.
When given the opportunity to address the court, Gravesande expressed similar sentiments. He begged for mercy stating that he has never been involved in any crime before.
“It’s very difficult for me. I’m punishing in prison, my family hurts, my business is affected and I can’t contribute to my community the way I want to. I am very sorry for the life lost and I apologize to the family. I am willing to contribute to them in any way possible, I need mercy … Sir, I am not a bad person. What you see here, just me. The only thing about me is that I love women, ”Gravesande noted.
State Counsel Teriq Mohammed noted that while the accused appeared to give the court reasons that merit mercy, the case involves the careless killing of one friend by another. The prosecutor asked the court to impose a sentence suitable for the offense of loss of life.
Justice Singh agreed with the State Counsel’s submissions.
He noted that although the father of three had claimed to be remorseful, he did not believe that he was truly sorry for what he had done.
“This was indeed a senseless act. There is nothing to support your claims that this man attacked your wife. Even your wife in evidence could not back up your statements… you came into my court and lied to my face … I see no mitigating factors here, ”the Judge told Gravesande before issuing a verdict.
Nevertheless, he deducted four years from the basic sentence of 60 years for time that Gravesande spent in prison pending trial.