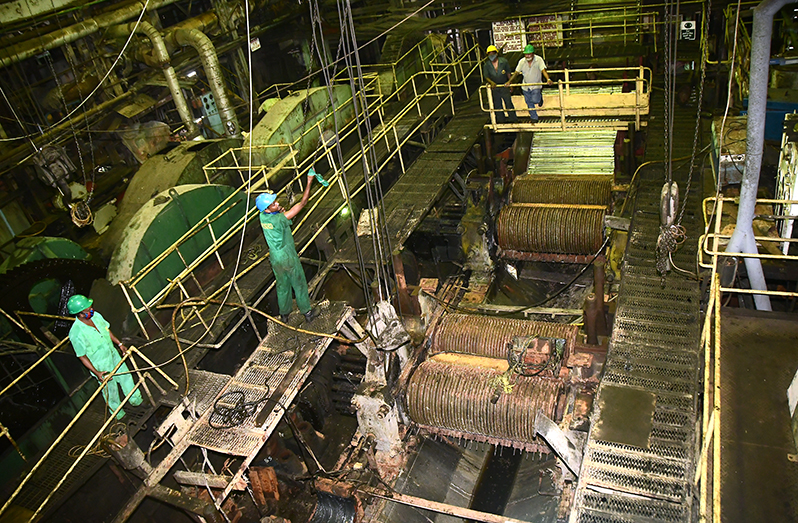 BIG restoration is currently underway at the Uitvlugt Sugar Estate to facilitate the first crop of the year, expected in February.
This was revealed during a tour of the estate on Friday, led by the estate management team, where media operators covered the daily operations.
During the tour, Locha Deokaran, a shift manager attached to the estate, revealed that work is also being installed two soon to replace one of the chimneys in the estate.
“This chimney is in very poor condition, as you notice; it has a lot of pillars and wood on it, and it partially decays. We had to use some reinforcement as stiffeners to keep it going all year long, because we didn’t have the material on hand to carry it out, ”said Mr Deokaran.

He explained that a three-CR chimney from the Whale Sugar Estate will replace the chimney.
Deokaran further noted that the current condition of the chimney is a dangerous threat to the estate and the large number of staff working in the vicinity of the vent.
“In this state, it is a threat to the workforce, because if the chimney collapses and collapses, it can damage the workforce; it can damage the whole area, and if anyone walks and passes. So, basically, this is what we’re doing now, ”said the shift manager.
The new chimney, which will be installed by February this year, according to Deokaran, will be taller, and will also reduce the amount of ash usually blown into the residential communities.

The replacement is expected to be completed within two weeks; it will improve safety status, as well as a reduction in fuel consumption.
In addition, work is currently being done on the estate crystallization system to achieve an improvement in sugar quality, grain size, factor restorations, and increased sugar extraction.
According to Goy Romain, another shift manager at the estate, the current system is scheduled for a complete overhaul, due to its pitiful condition.
“We’re supposed to completely restore the crystallization system and the drives, and the cooling and heating,” Romain said, adding: “The reason for the restoration will be to increase our sugar consumption; it will increase grain growth and crystal sizes. ”
Romain explained that the current system would have become ineffective over time, slowing down the estate’s work. However, he said restoration work will begin during the current out-of-crop period.

“What we intend to do during this off-crop and next out-of-crop period is to re-establish and restore all of them, so we can get more effectiveness and more crystals, ”he said. , adding: “This will help us boost our overall production, and reduce our cost.”
He further explained that, from time to time, the current system would have broken down, slowing down the work of the whole estate.
“With the current system, what happens from time to time would be our stand; and when it stalls, it increases our boil levels, and that will now slow down the process. And with that slowing down the process, it would slow everything down. It’s like the ripple effect, ”he said.
Reinstallation of the crystallization system and process pumps will see an improvement in sugar quality, and increased sugar production.
Deokaran also revealed that work will also be done on the estate’s pound dumper area, with a new can wash system. This stated, a less external issue will come into the factory; especially mud, thereby improving sugar production.