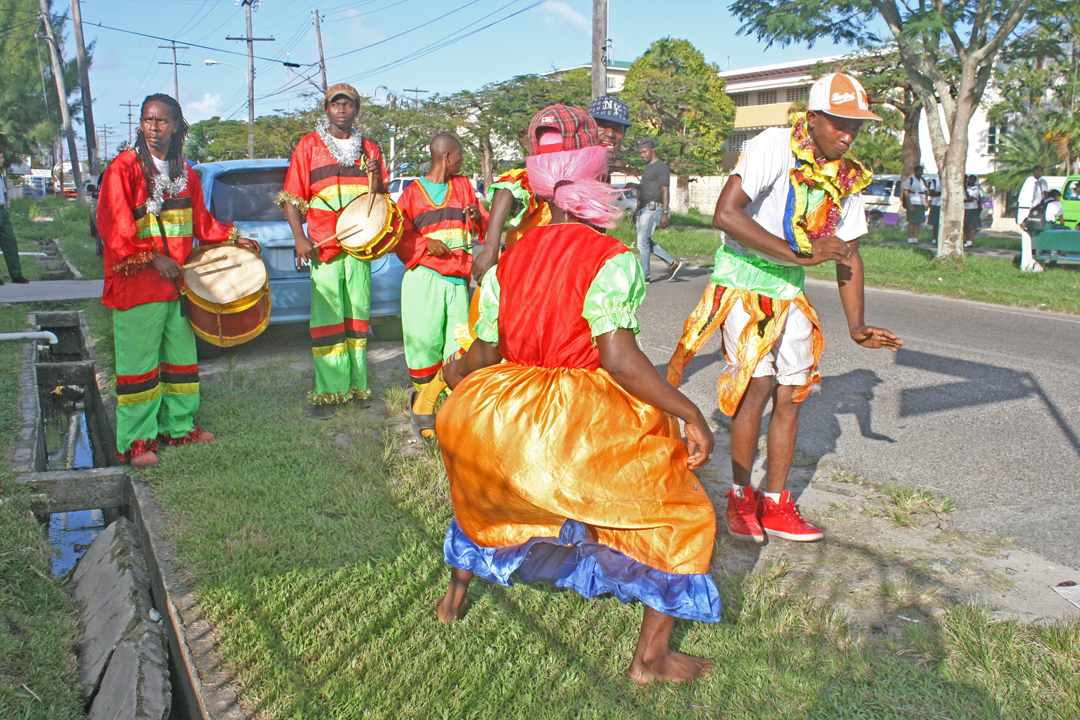 Christmas comes only once a year
And everyone has to get their share
But poor Brother Willy in prison
Drink sour ginger beer!
Band!

They are here again. Despite the austerity of COVID-19, masquerade bands have already begun appearing on the streets of Georgetown for the Christmas season 2020. Although smaller, tattooed, unexplored and ignorant, they work the streets in the hot sun , keeping a century-old tradition going. They are not what they should be. And yet, they are to be encouraged, though perhaps not in the midst of an ongoing pandemic.

I had been pointing out for years now that the masquerade tradition in the Republic of Guyana was moribund. But as if to believe my analysis, small groups continue to appear every Christmas season. However, the question is an appropriate one; do they keep the tradition going?

My serious assessments have not only been resisted and contradicted by the continued annual appearance of the bands blocking street traffic, but by local art practitioners. One of them completely rejected me at a small conference in Georgetown in 2018. This was a consultation organized by Donald Sinclair as the national director of the tourism sector. He had brought together researchers, administrators, cultural groups, music band and masquerade leaders and practitioners to discuss the latest form with a view to resuscitation for tourism purposes.

I was invited to speak and had said that traditional forms of culture in a natural process of cultural change are facing cultural erosion, cultural interference, transformation and extinction. The masquerade tradition in Guyana is one of those. Different phenomena and processes face such phenomena, but in the case of the Guyanese masquerade, it has long been fading and threatened with extinction. I further noticed that the only places where I saw signs of real masquerade bands, no matter how smaller, were in Linden, and active groups and annual street marches on the Essequibo Coast.

A few people protested at the conference. One gentleman said that was not the case. He was head of a band on Demerara East Coast that still carried on the trade. I remembered it from an interaction at Carifesta X in Guyana with myself and Trinidadian playwright Rawle Gibbons who was then Head of Department at UWA’s Festival and Creative Arts. His skills were truly impressive, and he was recruited to go to Trinidad, and was still working as a tutor in the trade there. Trinidad won what Guyana lost. His band still existed on the East Coast, but was he really active? Other band leaders and practitioners said yes. There were at least seven masquerade bands in Victoria and around other villages on the lower East coast; seven active bands.

Linden’s band leader, a gentleman called “Three Feet”, was also at the consultation. I had interviewed him and his band during field research some years ago, and represented Guyana at Carifesta in 2015. There was no representative of the Essequibo groups, so there was no direct report of ongoing activities there. Since I conducted the field research on the Essequibo Coast, the annual competition among those bands at Christmas sponsored by businessman Alfro Alphonso was over. Five masqueraders from Region Four had also gone to Carifesta in 2019 and really fired up Guyana Night’s performance, “A Year In A Day”, directed by Esther Hamer. So how can Guyanese masquerade bands be considered moribund?

Scraggly groups appear in Georgetown. They include many children. Children in these groups should be a good sign, as traditions die when not passed on and carried on by young people. But as for those seen in these bands, they show no knowledge of the masquerade form – they can’t dance, they haven’t learned to flounce, their costumes are arbitrary and weak copies of the minstrel, and they don’t represent any of the traditionalists. masquerade characters. There is a general laziness and an unwillingness to perform with speech and energy, let alone any familiarity with the craft. Drummers generally cannot play the known, recognizable masquerade rhythm with base, rhythm and kittle. There is no flute. Two or three languid drummers stand in a corner by a sun-shaded tree, playing faulty strain, far from the rest of the group who step out to block traffic and ask for monetary donations.

This is not the tradition, and the question arises, is anyone teaching them, the way that “Three Feet” teaches its recruits at Linden. Does anyone really learn the craft? Take, for example, the masquerade toasts, like the one printed above. The performers no longer recite them, and toast is no longer part of the Guyanese masquerade performance. And yet these speech acts are forms of spoken poetry that make for interesting study. Paloma Mohamed has researched them and recently made a conference paper.

But even more basic elements of traditional art are lacking. In the 2018 consultation, I was surprised to find that East Coast Demerara groups do not seem to consider street appearances at Christmas as part of their duty. They are prepared to perform on stage occasionally when requested in various shows and productions. They go to Carifesta, as has been said, small, select groups of them. But do they ever appear as a full band anywhere at any time? They are ready to perform cameos in small groups, sometimes doing spectacular things with stilts dancing and the ‘crazy cow’, but what about a full 20-piece band with all the characters and music appearing on the way?

While continually researching, I asked if any of the seven East Coast bands had ever performed on the street in Georgetown during the season. The answers were tentative. I was told yes, some did, although no names were given to me. I was told that some came out, but only parts of the bands, the full ensembles were not out then.

If that is the case, then how can you say that tradition is not dead, and that you are practicing it? The main part of the tradition is performance on the road. Masquerade is not museum art, displayed in a location and viewed. Performing at a stage show or concert is not the place of three or four men on stilts. It’s not flouncing to show the techniques on stage. It’s a band that appears on the road. If that is absent, then a large part of the tradition is lost.

Worse, I was told that parts of some of these bands from Victoria appeared last Christmas. It’s scary, then, that only a few members went out, not the whole band. It is unfortunate that there is no seasonal performance band culture with all its theatrical cast, sections, characters and segments in progress. I saw what was on the way last year, and it’s shocking to think that those were the representatives of the seven East Coast bands. They seemed unkempt, lacking in skill, color, meaning or scene, apart from being small in number. Those youths were untreated, and without uniforms.

I must conclude that a true masquerade in Guyana is a lost art: fluttering dance techniques; the spectacular, too-low skill of walking stilts, stilts dancing; playing the characters as a mad bull, or the rarely seen Mother Sally or Bam-bam Sally; the toasts that are now completely silent; the music – the three drums, the metal percussion (triangle) and the flute, with the flutes becoming scarce like Three Feet or the man called “Potagee”.

They appear in parts and pieces; never see a full, competent band. There is still time for these bands to prove themselves. They complained in the tourism consultation that they do not have enough money for clothing and equipment. I do not know whether it is feasible for the Ministry of Culture to assist with funding. But the bigger question is, can the bands do it? Do any of them have the membership, skills and ability to come out and compete? Or is this weak section of the road today all that is left? Where are the Guyanese masqueraders? Are they only found on the Essequibo Coast? Do they still exist?