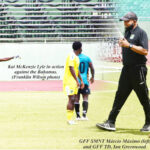 Máximo satisfied with involvement of local people in WCQ; notes that the process is gradual

By Franklin Wilson
With mixed results in the first window of the FIFA Qatar 2022 World Cup Concacaf clash qualifying last month, Head Coach of the Guyana Football Federation (GNT) Senior Men’s National Team (SMNT) says he is very proud of the level commitment shown. by the players in the squad.
Guyana, who has moved up two spots (165) in the latest CIF Cola FIFA World Rankings released on April 7th last, went down to Trinidad

and Tobago 0-3 in its first game (March 25) but rebounded against Bahamas (March 30) to win 4-0; both games were played in the Dominican Republic due to challenges presented by the global pandemic, covid-19.
The Guyanese victory has breathed life back into their quest to qualify for the second round, with two must-win first-round matches against Saint Kitts and Nevis (away on June 4th) and Puerto Rico here in Guyana on June 8th to close. out this round.
Saint Kitts & Nevis lead Group F qualifying with 6-point followed by T&T with 4-point, Guyana 3-point, Puerto Rico 1-point and Bahamas 0, all nations playing two games. Only the winner of the group will advance to the second round.
Building a solid foundation for the future of the sport in Guyana is one of the GFF’s stated intentions, Máximo noted, and thus the participation of so many young players who would remain involved in the process and would be integrated gradually to be effective.
Some eight players from GFF Academy Training Centers (ATC) were named in the last 23-man squad that traveled to the Dominican Republic, namely Shawn Adonis (goalkeeper) Jeremy Garrett (defender), Nicolai Andrews (defender), Jobe Caesar (midfield player) ), Ryan Hackett (midfielder), Nicolas McArthur (forward), Omari Glasgow (forward – scored his first goal against Bahamas; his 2nd senior cap) and Kelsey Benjamin (forward).
The experienced tactician working with his fifth national team further shared that the gradual process must be respected and he is promising that the nation would be pleased in the coming years with the level of investment being made on this moment to set Guyana apart in the region.
“The players can’t go straight from national programs to line-ups, because if you do that and the player loses confidence, then you double time for it to improve. Therefore, we have enough experience to say that the gradual process must be respected; of course, some players are exceptions and sometimes jump this process but most players should follow this gradual process. ”
Has introduced vase now

Team play system, Máximo further stated that players should graduate from the national program to the squad, then have the opportunity to have some game time as the learning curve continues and after that they would be included in the team line.
“I think we’re in the right process, almost 50% of the players in this current national team are local players. You would also notice that almost 40% of these players have finished the games we played because the game is unpredictable. As I said before, you don’t have real development without the involvement of local players, that’s why you maintain this balance and maintain the competitive level of the team. ”

Not only would the local group be refreshed as time passed, Máximo informed that the foreign group would also see a transition from time to time as adding new blood was important.
“We’re renewing not only a local group like Jobe, Omari, Nicolai but we’re also renewing the outside group, like Nathan Moriah-Welsh, Bayli Spencer Adams and Miguel Scarlett all as first timers, along with the Returning Kai McKenzie-Lyle, among others. We have a large gap between the ages of 23 and 28 in this group that needs to be corrected. Work to bridge this gap should have started before so we now need to get our talented young players involved and prepare them to take the Guyana game to the next level. As we evolve more talented young people would be added to the program while retaining the policy of GFF Technical Director, Ian Greenwood. ”
Máximo acknowledged that the lack of playing in a consistent league as well as not having friendly international matches brings its own challenges but given the current state of the world due to the pandemic, there is nothing that can be done.
However, the GFF has been training five days a week for the local players since January this year. Following the away matches and a short break, training is due to resume this week.