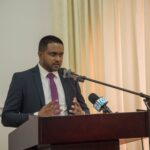 Kaieteur News – City Mayor Ubraj Narine has rejected the advice of the Minister for Local Government and Regional Development, Nigel Dharamlall, to temporarily re-appoint Candace Nelson as Town Clerk.
Nelson, who was acting as Town Clerk, was recently moved because she refused to take instructions from Georgetown Council. She had claimed that the council could not direct her and her supervisory body is the now defunct Local Government Commission (LGC).
The mayor had tried to address the issue. He told the press that the Council had moved a motion to immediately dismiss Nelson as temporary Town Clerk and replace him with the assistant Town Clerk, Julian Orgista.

However, this decision did not seem to fit well with Minister Dharamlall. The Minister stated in a letter yesterday that he had not objected to Nelson being appointed Town Clerk and had acted in that capacity until the temporary Town Clerk returned from annual leave.
In the letter, the Minister stated: “I have full confidence in Ms Nelson’s ability and in agreement with the Local Government Commission’s view that the suspension of personnel should not be tolerated.”
He stated that, as such, he anticipated that the Council would give Nelson his full support and co-operation. In response, Mayor Narine stated that he could not agree with the Minister’s suggestion.
He said in a letter that he could not find legislation that gives the Minister such authority.
“Please be reminded as I did in that letter of December 4, 2020 and refer me to legislation that grants you such authority. Again, I am guided by Chapter 28:01 of Section 97-117 leading to the Local Government Commission Act No. 18 of 2013. In the circumstances, I will judge and treat your correspondence dated December 21, 2020 as -rym, Narine added.
At a press conference last week, Mayor Narine explained that Nelson had dismissed him for refusing to carry out the Council’s instructions in respect of a letter to the LGC.
He explained that Nelson had failed to carry out instructions regarding that letter.
“I told her to take this letter to the Council because the Council must instruct the Town Clerk how to deal with such a letter. And he failed to do so. She had done the opposite, instead instructed the HR manager to carry out the duty of the LGC and you and I know, no commission is in place and the commission secretariat cannot operate without a body, the laws are state it clearly, ”The Mayor noted.