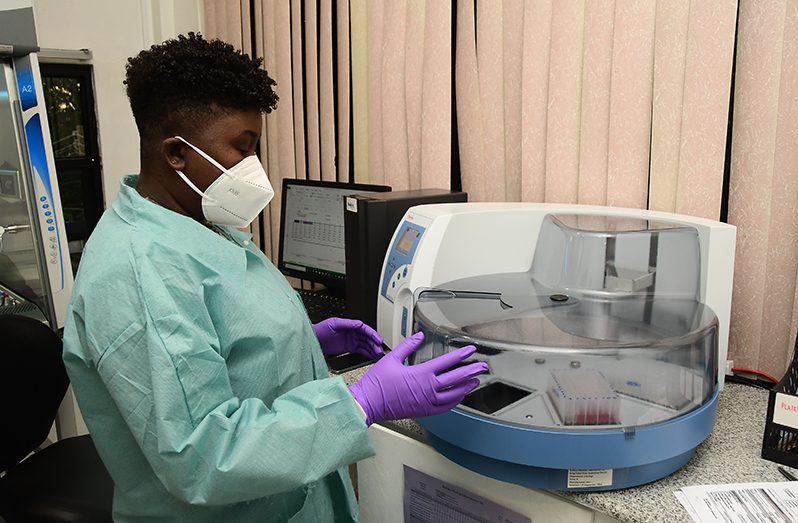 -‘Lab’commits to co-operate with authorities; CARPHA can analyze 10 samples per month

FOLLOWING reports that Eureka Medical Laboratories Inc. having discovered what appears to be an ‘abnormal’ composition of COVID-19, which could potentially be a new strain of the virus, the Ministry of Health has requested those test results from the private organization to explored further. .

Responding to a question from the Guyana Chronicle during his daily update with the Department of Public Information (DPI), Health Minister Dr. Frank Anthony, Guyana lacks the ability to maintain the genetic sequence necessary to identify the different types of COVID -19.

But, he pointed out, “As it stands, we have not received any such report from Eureka Medical Laboratories, and I have asked the Chief Medical Officer to write to Eureka to get the results for what they are claiming from these new varieties they have discovered in Guyana. ”

He noted that no such report had yet been received, but the Ministry will await to see if the organization will provide those.

On Monday, Director of Eureka Medical Laboratories, Dr. Karen Gordon-Boyle said that the Ministry had requested the samples that Eureka had identified include those abnormalities. She understood that these samples would be sent to the Caribbean Public Health Agency (CARPHA) for further analysis which would confirm whether these abnormalities are new COVID-19 strain (s).

“We will certainly cooperate because we would like to know as well,” said Dr. Gordon-Boyle, adding later, “If the ministry establishes the protocols with CARPHA, and we see any such cases and we want to find out and the ministry is interested in finding out if it n a specific type of COVID, we will make those samples automatically available for the ministry to send wherever we want to send it. ”

During his update, the Health Minister also highlighted, “I know, as a matter of fact, that Eureka Medical Laboratories does not, and does not, have the ability to carry out the genetic sequence of the virus they do, maybe they make conclusions. “

The minister stressed that drawing conclusions is “not good enough in this particular case”.

Last week, during an interview with the Guyana Chronicle, Virology Laboratory Manager at Eureka Medical Laboratories, Paul Cheddie said that it would appear that variants of the COVID-19 virus had been in Guyana since December, 2020.

He made this assertion in explaining that, based on the three-gene test that Eureka has been conducting, he discovered “abnormalities” when testing a number of people who traveled abroad. These abnormalities, he explained, could be a new strain of the COVID-19 virus, but Eureka cannot do any definitive pronunciation, since the organization lacks the ability for genetic analysis.

Eureka has been testing for three genes, or targets associated with SARS-CoV-2, the virus that causes COVID-19; these genes, says Cheddie, help enable the COVID variants to bind to human cells, and, thus, enter and infect the cells. He highlighted, however, that the variants can be identified because they have one gene less (that is, they only have two genes).

“When we see a positive of two genes versus a positive of three genes, that’s how we probably know we may be looking at something that is a variation of what we’ve been doing identify before, ”said Cheddi.

This ‘lost gene’ is the S gene, and this has been recorded internationally as the one that has really ‘left out’ in the UK variant. According to the Verge, a geneticist at the Francis Crick Institute in London, Theo Sanderson said ‘flagging’ samples with the drop-gen-S have been “very useful” in helping to identify possible coronavirus variants.

The minister also noted that CARPHA had been able to set up a project where they would be able to carry out some genetic sequencing. Through this project, countries were invited to send at least 10 samples a month. This, he reasoned, would allow countries to understand what strains or types of viruses exist.

He reminded that the currently worrying variant was the one identified in the United Kingdom (UK), known as the B117. This ‘UK variant’, which was found to be more transmissible, was identified by genomic sequencing carried out in that country.

“We in the Caribbean have not set up such a surveillance program using genetic sequencing and until we do, it will be very difficult to analyze what stress we are circulating in the region,” confirmed Anthony.

Meanwhile, in its updated Progress Report, CARPHA claimed that the risk of importing the ‘UK variant’ into the Caribbean was “very high” due to inward travel from the UK and Europe. The report also noted that four cases of the new variant have been confirmed in Jamaica. ”