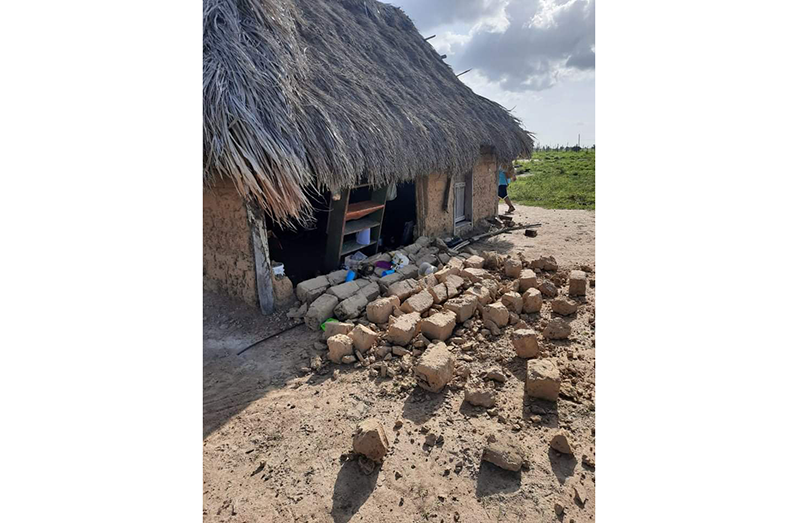 For a few seconds on Sunday afternoon, sometime around 15: 03h, people all over Guyana questioned whether a “big truck” was passing outside their homes or were experiencing a dizziness, but that a 5.7 earthquake had hit Boa Vista, Brazil, leading to tremors and some damage to property and ground surfaces in Region Nine (Upper Takutu-Upper Essequibo). The earthquake was subsequently confirmed by the Civil Defense Commission (CDC), which noted that it was an earthquake with a shallow depth of 10 km and an epicenter near Boa Vista in the Brazilian state of Roraima.

“The Upper Takutu-Upper Essequibo (Region 9) regional authorities have confirmed that there are some damages to property and ground surfaces in the Region due to the magnitude 5.7 earthquake that engulfed many parts of Guyana earlier (Sunday),” a statement stated CDC. Damage to property and ground surfaces was discovered in the community of Katoonarib, Deep South, Rupununi. The GDC further stated that the Regional Response System had been used and was ready to undertake an assessment in the area. The support, the CDC noted, would also

On Sunday night, Regional Chairman of Region Nine, Brian Allicock told the Guyana Chronicle that there were no reports of serious damage recorded in the region at the time, based on reports from the military personnel monitoring the Guyana border and Brazil and by local law enforcement. “(On Monday), we’ll go down further south to see if there has been any compensation because we heard that further south might have felt the tremor stronger,” said Allicock, however. The GDC also stated that it will continue to monitor the incident through the National Emergency Monitoring System (NEMS) and provide updates as more information becomes available. Anyone who suffered any compensation from the impact is asked to contact NEMS at (592) 600-7500 or at (592) 623-1700. (Vishani Ragobeer)