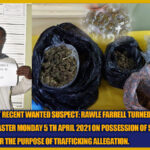 Rawle Farrell and the Cannabis suspect charged with human trafficking.

Kaieteur News – An Easter Monday woman transferred her son to the Customs Anti-Narcotics Unit (CANU) for alleged narcotics trafficking.
CANU wanted her son, Rawle Farrell, of Lot 699, Sixth Street, Dazzle Housing Plan, after he ran away during a drug bust at his home.
However, Farrell’s mother, along with other relatives and a lawyer, took him to CANU HQ where he was arrested. He is due to appear at Cove and John Magistrates’ Court today, where he will be charged with the crime.
It was revealed that CANU ranks received a tip-off and entered Farrell’s home last March 29.

According to reports, when Farrell saw them approaching, he left his home and ran away. Apparently, the ranks called to him and gave up, but they couldn’t keep up with him.
There were rumors that shots had been fired behind him, but CANU Head James Singh said this was not the case.
Informed the ranks, this publication decided to search Farrell’s home and unveiled several zip lock plastic bags and bulky parcels with leaves, seeds and stems, all suspected to be cannabis.
According to a CANU statement, Farrell’s mother had turned up at his home while the ranks were still there.
She had told them that her son lived alone and that she did not know that he was involved in illegal drugs. The woman then promised that she would locate and transfer him to CANU. She fulfilled her promise on Easter Monday.