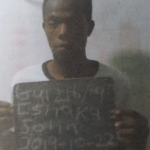 Kaieteur News – Apparently a prisoner remanded for yesterday’s “evasive” bullet murder to escape from Lusignan Prison located on the East Coast of Demerara (ECD).
According to police, the escapee from the jail is Ishaka John, 25, of 109 ‘A’ Sophia Field.
Police said John escaped between 02:00 and 02:20 hours.
Investigators reported that shortly before John escaped, he was seen at the top of the prison fence by three ranks from the Guyana Police Force (GPF) and the Guyana Prison Service (GPS).
They fired shots in an attempt to catch him but John did not stop, instead he ran. According to investigators, he ran between three of the prison’s towers before he disappeared.
The ranks that fired the shots were unsure whether or not any bullet had been hit. Nevertheless, they searched the surrounding areas to see if it might have been hit and injured but they turned up empty-handed.
As police continue their attempt to recapture the runoff, an investigation into circumstances leading to his escape was launched.
John is accused of murdering a store manager, Jason Bowen, on October 12, 2019. He allegedly chased Bowen down Church Street to rob him. Bowen was cornered on a bridge in front of the office of the then Leader of the Opposition, Bharrat Jagdeo.
A scuffle ensued between the two who allegedly beat and stabbed Bowen to death.
John was subsequently arrested by public-spirited citizens while trying to escape. He was handed over to police and days later was charged with murder and detained in prison.