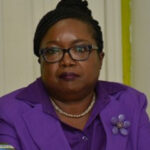 Kaieteur News – Guyana Elections Commission (GECOM) Deputy Controversial CEO (CEO) Roxanne Myers will take on CEO duties as Keith Lowenfield goes on annual leave.
GECOM sought to clear the misconception that Lowenfield had been ordered to go on holiday by Ret’d Justice Chairman Claudette Singh, as reported in a recent news article.
In a statement, the Commission stated “For the sake of clarity, it should be noted that Mr. Keith Lowenfield applied on September 1, 2020 for his 2016 – 2019 cumulative annual leave totaling 146 days. ”
GECOM stated that Lowenfield’s application had been approved by the Chairman and his absence began last September 7. Lowenfield is expected to return to work on January 30 next year.

Justice Singh was quoted in the above article as indicating that the DCEO will now take on the role of Lowenfield in assisting with the preparations for the forthcoming Local Government Elections (LGE). But while the Commission addressed that issue, it remained mum on the calls for the controversial Lowenfield, Myers Removal and Class Four (RO) Returning Officer before the LGE process began.
The latest push by the Private Sector Commission (PSC) against the officials and others pending criminal matters came to court for their part in the long elections on March 2, 2020.
“It is unthinkable and certainly unacceptable that GECOM should continue to hold Local Government Elections while these officials remain employed and involved in the conduct of these elections,” their statement said.
The PCC’s call triggered a response from the leader of the A Partnership for National Unity + Alliance for Change (APNU + AFC) Coalition Opposition, Joseph Harmon.
“The APNU + AFC is not surprised but is surprised that the Private Sector Commission (PSC) is now openly advocating the PPP regime’s position and calls for the removal of some Electoral Commission staff using ‘ the trumpet charges against them as the excuse to get rid of them. This is wicked and unacceptable. The APNU + AFC condemns this type of political posturing by the PSC. It is appropriate to remind the PSC that the rule of law must prevail and that these people should be presumed innocent until guilty, ”Harmon said in a statement.
While the government has committed to upholding its promise for LGE next year, Vice President Bharrat Jagdeo echoed similar sentiments with the PSC at a press conference last month where he made it clear that “ criminal elements ”of GECOM.
“We have no confidence with criminals running the system. And so, we expect the Commission to get rid of the criminals. They don’t need any evidence. The whole country knows that these are criminal types who tried to steal the elections and put this country through trauma. They cannot run any election, and I hope that the Chairman of the Commission now has to fight the criminals. And so, there have to be changes there, that’s what we want, ”the VP had said.