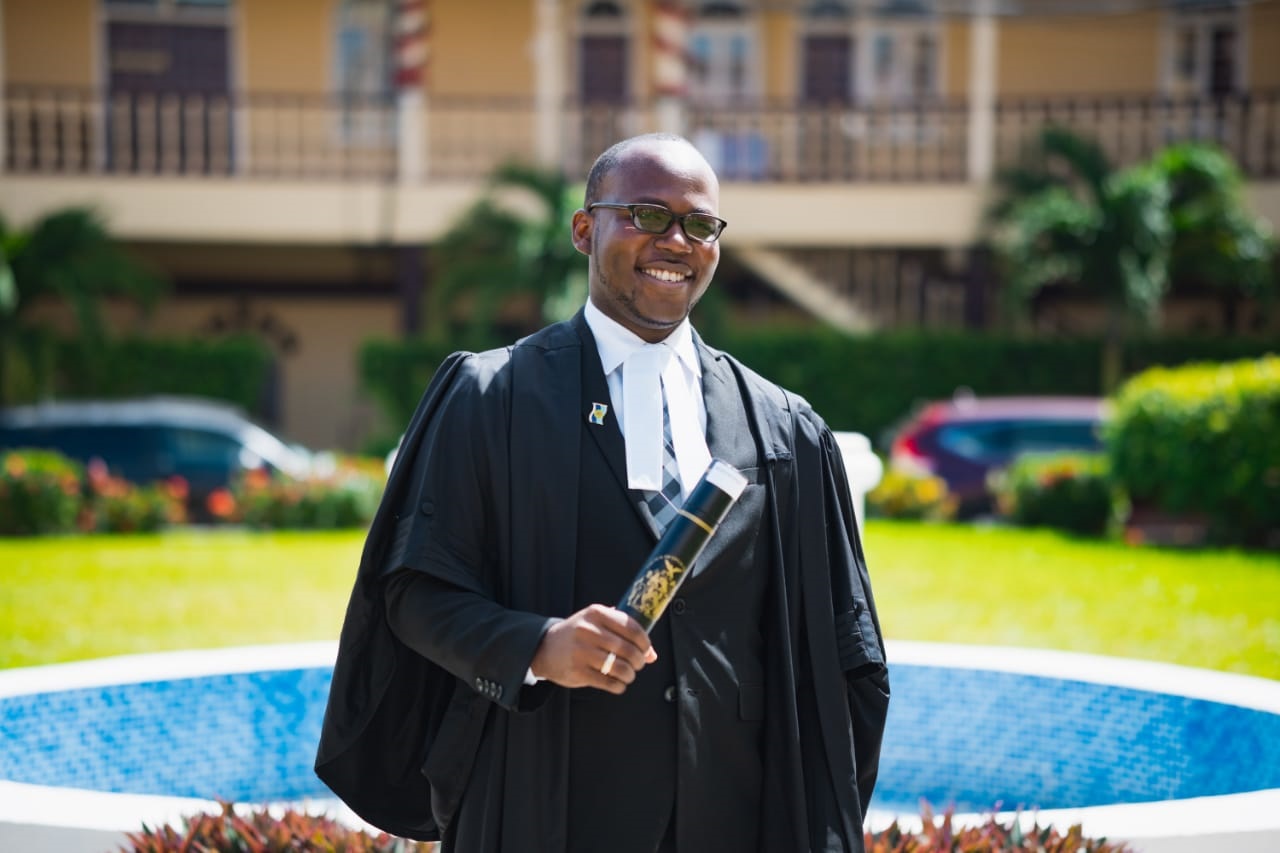 When Dexter Smartt, 28, was admitted to the local bar to practice law in Guyana last week, he marked the latest step in his journey in service to others.

His petition by his cousin, attorney-at-law Faye Ann Barker, was presented to Acting Chief Justice Roxanne George-Wiltshire at Demerara High Court on Wednesday.

The new attorney, who is currently working alongside attorney-at-law, Dexter Todd, said he did not have his sights set on the law field in his younger years, but grew fond of the career at years of volunteer work brought him to the realization that he has a passion for bringing access to justice for those who are usually under-represented or under-represented.

Smartt, who hails from Jonestown, Mahaica, began his academic journey at Helena Nursery, then Helena Primary where he gained a place at North Georgetown High School and subsequently gained nine CSEC passes.

He then went on to the 6th Form College of the Nations and graduated with an ‘A’ Level Diploma from Cambridge University where he read for courses including Law, Psychology and Environmental Science. During this time, the young lawyer began volunteering with the Varqua Foundation as a teacher to help underprivileged students in the Tiger Bay area and young people in indigenous villages across the country.

When asked Smartt what drove him to become a volunteer, he said, “I think it is my civic duty as a citizen of the earth to help others. I also remember the days when I had nothing and needed help … Similarly, I prefer to help sort out the issues in society than complain about them. So I chose to be more active in resolving the problems rather than complaining and posting about them. ”

The 28-year-old player continued to serve as a volunteer for many other organizations even during his time reading for a Bachelor of International Relations Degree at the University of Guyana (AS). After completing those studies, he went straight to the law program to read for his law degree.

“I have always been interested in service to others so when I was making international contacts, in my third year, I did international law and the HoD at the time [Head of Department] of law who was a lecturer of that course encouraged me to make law. He highlighted that I can be of a better service to the people I want to help if I’m a lawyer, ”he said, adding that the law is a good choice as it would help anyone develop their careers in other areas.

During this time, Smartt was an active member of the AS Law Society’s school outreach program and was then elected public relations officer for the association from 2016 to 2017. He then served as a final year student representative to the law society in during 2017 and 2018 Smartt’s many successes during this time included being one of the contributors to two books published by Ram & McRae – the “Value Added Tax Manual”, and the “Companies Act Handbook”

Smartt subsequently graduated with his Bachelor of Law Degree in 2018 and gained admission to Hugh Wooding School of Law (HWLS) in Trinidad to read for his Certificate of Legal Education (LEC). Smartt told Stabroek News that the journey at HWLS was a bit challenging but initially excited about studying abroad.

He recalled, “I was never afraid of a change of venue, I was very excited. My doctors made all the arrangements for me [Smartt had pre-existing medical conditions and at the time needed to have his medical records at a health facility in Trinidad in case of emergencies], my family reassured me of the support I will receive, so I was ready. Trinidad was not like Guyana but I adapted well. ”

While studying at HWLS, Smartt served as a Law School representative for the Guyana Student Association in Trinidad and noted that he was active on virtually every other committee and group during his time at law school.

Completing his final year in law school, Smartt said, was definitely a challenge as the COVID-19 pandemic brought added pressure along with having to study. The young attorney noted that he could push through as he had a good support system.

“I had a very good and effective support system. My friends, family and school administration gave me the support I needed. My family was always there for me and my friends who were at the top of the cake. I can never complain about not having the support, ”he said joyfully. Further, he mentioned that during the initial outbreak in Trinidad, he spent a lot of time assisting others, working with the school to address student issues. He added that he had also tried to stay social by using online media as they were not having social gatherings because of the enforced COVID-19 protocols.

However, the exam period was intense as he stated, “these were the hardest exams I have ever had.”

Smartt told this newspaper that one of his proudest achievements is the start of the “Ubuntu Foundation,” which focuses on youth empowerment through education, in 2019. The foundation also focuses on advocating for better access to justice and legal representation to Indigenous. people in the regions as well as working on reintegrating indigenous people back into their communities after serving custodial sentences.

“Ubuntu is short for the Zulu phrase ‘Umuntu ngumuntu ngabantu’, it means ‘I am because we are’. This organization will be self-financing, I will focus on ensuring that we have appropriate legal representation for indigenous people and interpreters if they do not understand English well. It will also focus on getting them home after their rehabilitation and reintegration into society. ”

It was this passion of service to indigenous communities that landed Smartt with a UN scholarship and a Guardian Group to pursue a Diploma in Global Leadership currently at a UN-founded Peace University.

On receiving his petition, Smartt noted in his pre-marriage submission as attorney-in-law, that it was an honor to present his petition to the Chief Justice and to quote him as inspiration for his legal journey so far. He noted that over the years he had admired her wealth of knowledge, judgments and fairness.

The young attorney also thanked Barker for presenting his petition to the court and noted that she was the first lawyer he had met and has even been a shining example in supporting his journey from his high school years to the law.

“My mentors, the retired Chancellor, Justice Carl Singh, and former President and former Prime Minister Samuel Hinds (Uncle Sam), you all made a significant contribution to my life. Justice Singh went beyond what he needed to make sure I stayed the course, ”Smartt told the court.

The Chief Justice, on receiving the first attorney at the bar for 2021, said she was happy to bring the petition before her and was proud of Smartt’s extensive Vitae Curriculum, which included over one year on ten volunteer work and ongoing study.

Accepting Smartt’s petition, he noted that he entered the law profession with extensive knowledge, already setting the bar very high for himself. He urged as he pressed on in the field that he continued to raise the bar to be among the best in the profession.

The newly admitted attorney plans to begin studies for his Masters Degree in Environmental Law in the coming months.