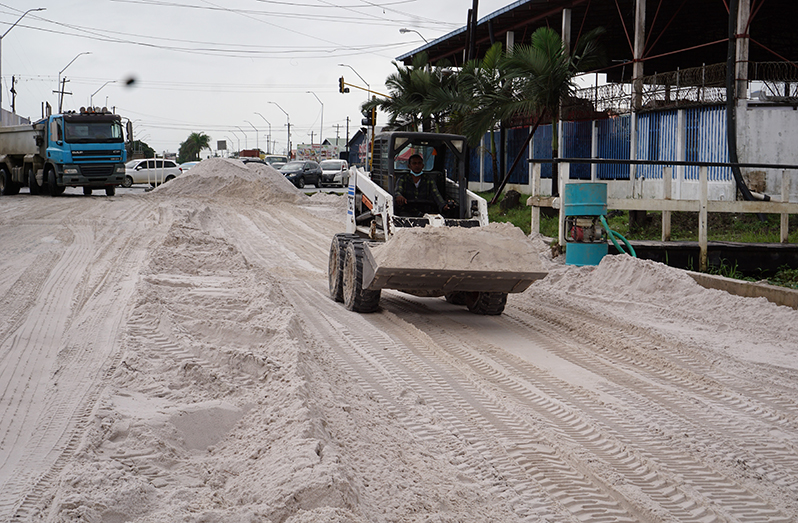 After weeks of inactivity, roadworks have resumed on the derelict Hunter Street, under a new contractor.
The new company now has the task of correcting some of the defective work done by the previous contractor, including removing and replacing the sand fill. Vieira 66 Logistics was recently awarded the contract to complete the project, which focuses on the portion of the street that stretches from West Ruimveldt Front Road to Mandela Avenue.

“I do the road, so that’s capping the road and sidewalks,” explained company owner Mark Vieira.
Vieira, estimating it will take less than two months to complete the project, said the timeline could be affected by factors such as the weather, which are beyond the company’s control. “It depends on the weather and everything else, but maybe a month, [a] a month and a half, it should be completed, ”noted Vieira.
Hunter Street is one of a few alternative routes connecting the East Bank Demerara to the city, and as such has become a major road for many commuters trying to avoid the heavy traffic bound to Bank the East.

Given the heavy traffic crossing the road, it was decided to implement repairs and upgrade the street. Surrey Paving and Ideal Engineering were awarded the initial contract for $ 86.6 million in May 2019 for the geometric improvement of the street, which included raising the level of the road above the drains to prevent flooding and upgrading the sidewalks. The contract is scheduled to start in December 2019. The contractor has been given several extensions, although work on the project is still at a standstill. Last month the Ministry of Public Works reported that steps were being taken to terminate the contract.
It is unclear how much money was paid to Surrey Paving and how much was paid to Vieira 66 Logistics to carry out the project. It is also uncertain why the original company was unable to complete the project.

Attempts to contact Public Works Minister Juan Edghill for comment have been in vain. Under Surrey Pavement the road was widened and filled with sand, but remained in a pitiful state, even as vehicles continued to cross the driveway. According to Vieira, the sand fill made by the previous contractor was not robust enough and as such, his company must now rectify this before it can move forward. “It has a lot of impurities, wood, plastic, mud, so to make sure we get a great job, we basically have to remove the sand they put in and add things fresh. In these weather conditions this was very difficult, but we hope to finish that between now and Wednesday, and then from there we move on, ”explained Vieira. Last Sunday, company employees were seen busy hauling the sand fill. Project foreman Matthew Vieira said despite the challenges, the company was looking forward to doing a good job.

“We’re going to try to work through the night to get it finished as quickly as possible, and we’re looking forward to giving the people of the neighborhood a beautiful way. We don’t know why a former contractor took so long to make the road, it could have been completed a while ago, ”Matthew shared in an interview with the Guyana Chronicle.
As well as changing the sand fill, Matthew Vieira said there are other aspects the company must work to correct.
“We are trying to repair the poor work done by the last contractor. They gave us more stress than if we had to do the project from scratch, ”he said.
He further explained: “The foundation was bad, the drainage wasn’t good either and they broke some pipes and threw sand over it [sic]. We already made a call to GWI and hope they come next week to look at it. ”He said that due to the Christmas season and heavy traffic, it was decided not to close the road even though work was being done.