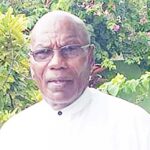 Found murdered at his farmhouse on July 10, 2020, Terrence Alstrom.

Kaieteur News – Nine months after the murder of Terrance Alstrom, 66, at his Kuru Kururu farmhouse, police have not yet captured his murderer. In fact, detectives are still chasing leads to find out who committed the heinous act.
Alstrom’s body was discovered by one of his sons around 22:30 o’clock on July, 10, 2020.
His remains were found covered only with his towel. He was lying face down in the yard of his Track B Kuru Kururu home located along the Linden / Soesdyke Highway. An autopsy later revealed that Alstrom died of blunt force trauma to his head. Someone was beaten to death but who he was, it remains a mystery.
Alstrom was relatively new to the Kuru Kururu community. Kaieteur News learned that he left his home in Georgetown and moved there some years ago to pursue farming.
He had built a farmhouse and started planting crops. His relatives were concerned at first because he lived there alone and his nearest neighbor was located about 100 meters away from his building.
However, those concerns soon faded as he constantly communicated with them, calling almost daily to inform him that he was safe and happy. He would even visit his children often in Georgetown.
But this family’s worst fears soon became a reality as the humble farmer was found dead on July 10, 2020.
Alstrom is believed to have been lured out of his house to meet his murderer based on where his body was found. A photo seen by this media house showed Alstrom’s lifeless body being found a short distance away from his farmhouse.
As the investigation progressed, detectives were led to believe he was murdered while promoting theft. Sources close to the investigation had related to this newspaper that Alstrom’s phone along with other personal belongings were missing.
Cops had detained an individual for questioning but found no compelling evidence to bind the individual to the incident. Individuals living in the area could not provide any useful information either. Family members said Alstom’s neighbor had not noticed any suspicious movements or heard screams before his body was discovered.
The last words Kaieteur News heard from the police on this case were, “No new developments, investigations are ongoing”.
Alstrom’s family is hopeful that detectives can break new ground in the case as soon as possible.