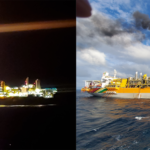 No end in sight, as Exxon continues to pollute Guyana airspace

ExxonMobil has been flailing gas in the Liza Destiny ship all year, despite the fact that the gas is due to be re-injected into the reservoir. These photos, taken three days ago, show Exxon blazing day and night.

Kaieteur News – Today marks the one year since ExxonMobil started producing oil at its Liza One operations, in the Stabroek Block, about 100 miles offshore. It should have been an important occasion as it marked the first commercial oil enterprise in Guyana.

However, there are too many worrying signs. Apart from the country being unfit to control the sector, ExxonMobil continues to damage the environment by blazing billions of cubic feet of natural gas toxic gas in its Liza One operations.
What is even more worrying is that the US oil giant has yet to publicly set a date in sight for the torch to be cut down to nothing.
Kaieteur News reported in its November 16th issue that the Head of the Environmental Protection Agency (EPA), Sharifah Razack, had provided details that showed Exxon had ramped up flames to 16.496 million standard cubic feet of gas per a day in October – an increase of 15 million cubic feet per day in previous months.
This information is consistent with statements made by Hess’ representatives during its third quarter 2020 earnings call. Stabroek Block co-venturer had indicated at the end of October that it was happy to inform its shareholders that production rates in Phase One Liza had increased to 105,000 barrels of oil a day in the previous few weeks.
Previously, it was public knowledge that Exxon’s production was hovering around 80,000 to 90,000 barrels of oil a day, as was the case in September.
Kaieteur News, last week, reached out to the EPA’s Chief Razack asking for updates for the Exxon flare up in December, as it had reported receiving regular reports from the U.S. oil company. Those details were supposed to be submitted to this announcement on Friday but were not. Razack, however, has assured Kaieteur News that the same would be done by tomorrow.
Worryingly, due to ExxonMobil’s ramp of flaming poisonous gas in Liza’s Phase One operation, so much has been dropped that Guyana is now one of the top five countries in the world for a year-on-year per capita flame.

In September, Guyana had tracked Libya, Gabon, Oman, Qatar and Iraq, in total gas flame per capita, judging from statistics from the World Bank’s Global Gas Flame Tracker Report (July, 2020).
However, the rising torch in October caused Guyana to surpass Iraq.
It is important to note that the total volume of Guyana flared in a year is not as high as Iraq, which is one of the worst pollutants in the world, alongside Russia and the United States.
However, due to Guyana’s small population, it emits more toxic gas per capita than those three countries. Russia and the United States emitted 161 and 53 cubic meters per person, last year, respectively. Iraq emitted 456 cubic meters per person last year, behind Guyana’s emissions in the past year, which stands at an average rate of 461 cubic meters per person. This would equate to the destruction of 2.17 acres of forest for every Guyanese, or a total of 1.56 million acres of forest.
ExxonMobil was only due to start in December last year when the project started, to test the equipment.
However, a blaze passed the start of the project. The company claimed it had to flame, as its gas compression equipment was faulty and needed repair abroad.
The repairs were reportedly difficult to get in a hurry, given restrictions imposed by the COVID-19 pandemic safety guidelines on companies. Exxon has not yet completed the repairs to all of its faulty equipment.
According to the EPA brief, ExxonMobil said it started the second main gas compressor in October, and implemented it along with the main gas compressor and the injection gas compressor. The third-stage flashlight gas compressor and suction silencer have been repaired in Germany and returned to Liza Destiny’s Float Production, Storage and Unloading Boats (FPSO) in late October.
It is being replaced, and is expected to restart in mid-November. Exxon, according to the November update, expects the equipment to take one to two weeks of testing to confirm that the repairs and modifications have worked.
Some have pointed out that Exxon’s snail’s speed in repairing the faulty gas compressor is another clear example of the company’s disregard for Guyana, its laws and the environment. These comments arose after Exxon spent USD $ 186M to repair a torch at a Scottish factory, late last year.
The dangers of torching
Research by Kaieteur News has found that gas flares are extremely damaging to the environment. A special study conducted by the World Bank states that torches release more than 250 toxins including cancer-causing agents such as benzopyrene, benzene, carbon disulphide (CS2), carbonyl sulfide (COS), and toluene. It also releases metals like mercury, arsenic, and chromium and nitrogen oxides.
Burning the gas is harmful to the environment. It tends to destabilize the greenhouse effect, a natural process that involves a delicate balancing act between the incoming and outgoing radiation of the earth’s atmosphere. This balancing act is tipped over when rising levels of greenhouse gases, many of which are caused by oil production, are released into the atmosphere, leading to global warming.
Torching is also dangerous to human health. Nigerian scientists, Omosivie Maduka and Charles Tobin-West, in a joint paper presented with the US National Biotechnology Information Center (NCBI), had explained that a blaze in the Niger Delta area of ​​Nigeria had polluted the air and water, and deposited the formation. of acid rain. All of this, they said, has had negative consequences in the communities there, including chronic and recurrent respiratory diseases, abnormalities in the blood, increased susceptibility to some blood diseases and others.