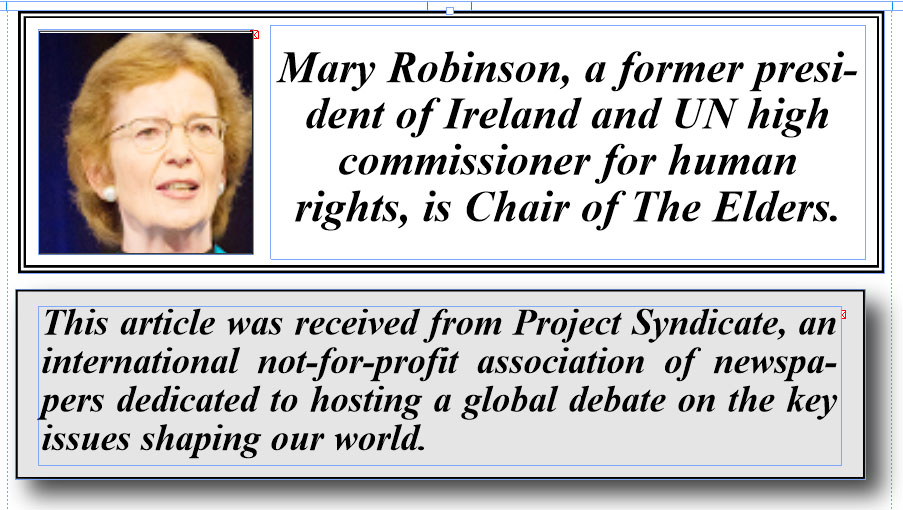 DUBLIN – COVID-19 turned the world upside down in 2020. But it has also shown us that when there is political consensus for action, human ingenuity and innovation can be used at the scale and speed needed to meet challenges worldwide.

With unprecedented speed, we have developed, tested and begun to use a number of effective vaccines for COVID-19. Now we must take the same decision to fight the other major existential threat to humanity: climate change. As the UN Secretary-General António Guterres said last month, “our future security and prosperity depends on bold climate action.”

And yet, even at the latest Climate Ambition Summit on December 12, many leaders’ commitments were still well below what is needed to meet this collective challenge. To be sure, the European Union, the United Kingdom, and even some of the smaller countries most vulnerable to climate change have significantly strengthened their 2030 emissions reduction targets. But the United States, Japan, China, and major greenhouse gas emitters need to follow suit, preferably well ahead of the United Nations Climate Conference (COP26) in Glasgow this coming November. Given the crisis we face, there are no more excuses for delay or prejudice.

Five years ago, after lengthy and lengthy negotiations, the world came together to end the Paris climate agreement. This was one of the greatest triumphs of multilateral diplomacy in recent years, but it must not be taken for granted. Without an even greater commitment to action, the Paris endowment risks being completely wasted.

The events of the half decade meanwhile have created a geopolitical landscape that would be unrecognizable to those who congregated in Paris. Back then, words like “coronavirus” or “Brexit” wouldn’t have aroused much more than an outright shrug; now they control the appalling attention of policymakers and heads of state and government around the world.

But we cannot allow these developments to disguise the continuing and increasingly serious need for climate action, particularly climate finance. More than a decade ago, the world’s wealthiest countries pledged to use $ 100 billion a year by 2020 to assist poorer countries with climate adaptation and mitigation efforts. That deadline has now passed, and these countries have not yet fulfilled their promise.

Yet, there is hope. I am very pleased that US President-elect Joe Biden reaffirmed his commitment to rejoin the Paris agreement immediately after taking office. America’s leadership is desperately needed after the wasted four years of unnecessary destruction under Donald Trump. A $ 2 billion payment to the Green Climate Fund by the US to help fulfill its part of the $ 100 billion commitment would be a definite complement to rejoining the Paris agreement. This money has already been pledged during Barack Obama’s presidency, so there is no excuse to keep him sitting in the coffers of the US Treasury.

Likewise, other rich countries must not re-use the focus on the US as an alibi for backhauling their own commitments. The recent announcement by the German Chancellor, Angela Merkel, that it will start a new international process on climate finance next year is a welcome statement of intent. But past experience shows that we cannot rely on sublime rhetoric.

In addition, all countries in 2021 must provide clear proof that they are reviewing and seeking to increase the ambitions of their nationally determined contributions, the voluntary instrument through which signatories carry out their commitments under the Paris agreement.

Unity and justice are at the heart of the Paris agreement and the UN Sustainable Development Goals, which were also adopted in 2015. These principles, and the responsibilities they include, are more important than ever as we track sustainable recovery from COVID-19 shock.

The harsh reality is that we have wasted too much time in the five years since Paris. The policies we need to cut emissions – including ending fossil fuel subsidies, a meaningful carbon price, and investment in renewable energy – have been fit, inconsistent, and chaotic. But the climate crisis, like COVID-19, observes no boundaries and is indifferent to national sovereignty.

While attention has been properly focused on the virus, the world has also witnessed even more extreme weather phenomena, from wildfires in Australia and California to the most costly storm recorded in Bengal Bay, and it forced two million people to leave their homes. We have all become acutely aware of the fragility of human existence and the extent to which our friends, across boundaries and generations, are interconnected.

As we move from Paris to 2030, global leaders, businesses and citizens alike should expect to be judged on the steps being taken (or not) today. Neither our descendants nor the planet will tolerate a more selfish short-term.