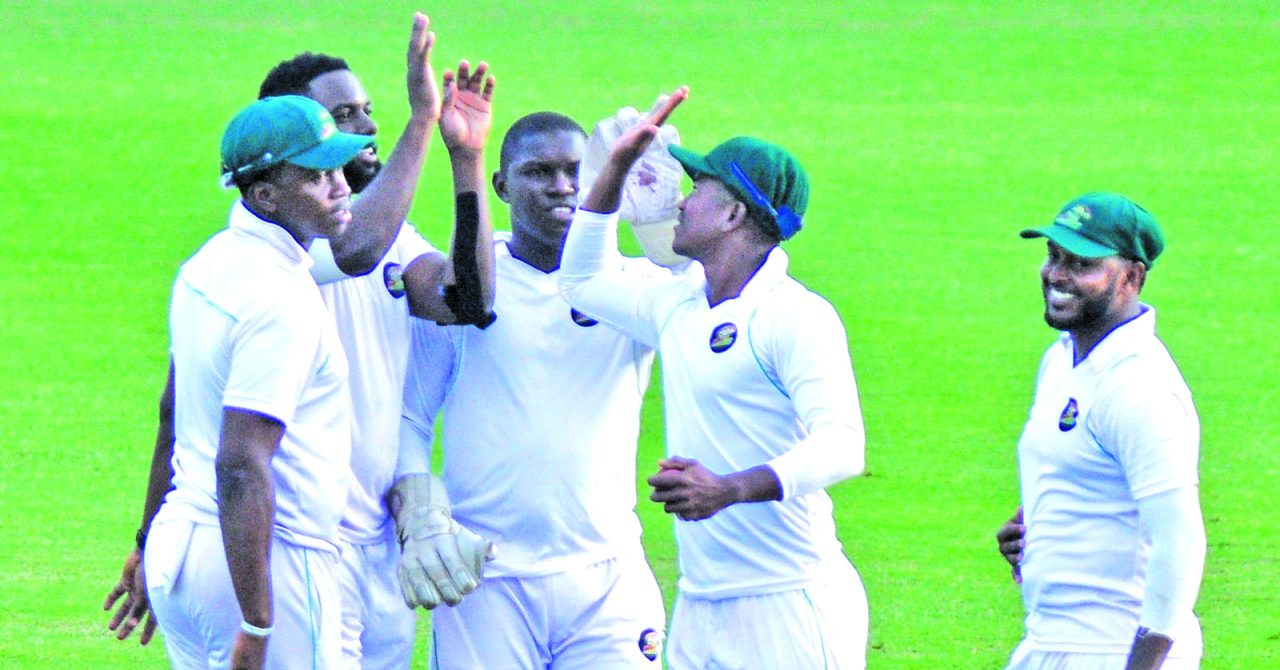 West Indies have chosen alternative squads to tour Bangladesh. With 13 experienced players opting out of the tour for personal reasons, injury concerns and Covid-19, it was an opportunity for some of the alternative players who did well in Regional cricket to make both squads. That was the case for some of the players in the squads but for the Jaguars, most of them would have considered themselves unlucky.

After recent updates, only two Guyana Jaguars players will travel to Bangladesh. Permaul Veerasammy and Raymon Reifer. Over the years, Jaguars have been the most consistent team at the 4-Day Regional championships, winning five trophies in their last six seasons. In the Super50 format, Jaguars have not found the winning recipe. However, they have been some strong solo performances.
Captain Cool
Jaguars inspired leader Leon Johnson led his troops brilliantly and with regular Test captain Jason Holder opting out of the Bangladesh tour, this was a perfect opportunity for Johnson to showcase his superb leadership quality.

West Cricket India’s Chief Selector Roger Harper noted that Johnson was considered a test captain but Barbadian selection panelist Kraigg Brathwaite opted. During the trip to New Zealand, Roston replaced Chase Brathwaite as vice-captain of the West Indies, now, in the next trip, Brathwaite is captain of the Test team.

Brathaite led the Pride to a 4 Day Regional title last year but his leadership skills are no match for Johnson. Kraigg has led the West Indies in five matches and missed all five of those meetings. The phrase that comes to mind with captain Kraigg’s appointment is: “we need to move backwards.”
Some may argue that Johnson did not consistently meet his expectations with the bat, but others did not get an extended opportunity. If not as captain, then Johnson should have made the Test squad based on his recent 4 Day Regional stats. 472 runs scored in 14 flyovers at an average of 36 while Brathwaite made 468 runs in 15 flyers with an average of 33.42.
Great Barnwell
For the past three seasons, Christopher Barnwell has done all the talking with his bat in the Super50 Regional tournaments. In addition, Barnwell scored runs in Region 4-Day last season and made an important breakthrough with ball in hand.
On one occasion, selector says X and at other times selector Y. Some of the outstanding Regional players in the West Indies squads do not have the luxury of boasting a better record in Super50 cricket than Barnwell.
The mature right wing, Barnwell, scored 351 runs in the 2019 Super50 Cup and 435 runs in the 4-Day Regional tournament. That speaks volumes since the entire rounder made that transition with ease.
The other guys
Based on the current form and previous experience of the West Indies ODI, Chandrapaul Hemraj, who was the leading run scorer at the US Open Championship, would have fancied his chances in the ODI squad. For the wicket-keeper slot, Anthony Bramble should have made the cut.
West Indies have not opted for a reserve list, and some of the players in the ODI squad will perform backup player roles in the Tests. Joshua Da Silva is the lone wicket keeper in the Test squad and if there is any fear of injury to Da Silva (God forbid), then a wicket keeper from the ODI squad will have to be drafted into the Test squad. So, one of the reasons why Jahmar Hamilton was selected in the ODI squad.
Another argument that can be brought to the table is that Hamilton scored more runs than Anthony Bramble in the last Regional Super50, but that still doesn’t justify not choosing Bramble completely, as the Guyanese gloves have be impressive in the 4-Day Region tournament in previous seasons.
Bottom line, the lack of choice of some Guyana Jaguars players is a slap in the face. He says the Guyanese players are not good enough for the selection panel led by Roger Harper.
BANGLADESH V WEST INDIES FULL Tower APPENDIX
January 10: West Indies arrives
January 18: One-day warm-up game, BKSP, Savar
January 20: 1st ODI, SBNCS, Dhaka
January 22: 2nd ODI, SBNCS, Dhaka
January 25: 3rd ODI, ZACS, Chattogram
January 28-31: Four-day warm-up, Aziz MA Stadium, Chattogram
February 3-7: 1st Test match, ZACS, Chattogram
February 11-15: 2nd Test match, SBNCS, Dhaka
West Indies Test Squad: Kraigg Brathwaite (captain), Jermaine Blackwood (lieutenant), Nkrumah Bonner, John Campbell, Rahkeem Cornwall, Joshua Da Silva, Shannon Gabriel, Kavem Hodge, Alzarri Joseph, Kyle Mayers, Shayne Moseley, Veerasammy Permaul, Kemar Roach, Raymon Reifer and Jomel Warrican.
West Indies ODI Squad: Jason Mohammed (captain), Sunil Ambris (lieutenant), Nkrumah Bonner, Joshua Da Silva, Jahmar Hamilton, Chemar Holder, Akeal Hosein, Alzarri Joseph, Kyle Mayers, Andre McCarthy, Kjorn Ottley, Rovman Powell, Raymon Reifer and Hayden Walsh Jr.