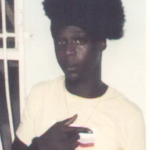 One of 13 accused of killing a Sophia man, remanded in custody

Another suspect accused of being involved in Campbell’s murder.

One of the suspects accused of being involved in Campbell’s murder.

Kaieteur News – One of the 13 men accused of killing a Sophia man, who intervened after they assaulted and stabbed his younger brother, was detained in jail yesterday.
The accused, Shay Carter, appeared at Sparendaam Magistrates’ Court before Liverpool Magistrate Rochelle, who read the indictment charge to him. Carter was not required to plead to the charge that, on March 21, 2020, at B-Field Sophia, Georgetown, with others, he allegedly murdered 25-year-old Kevin Campbell.

Campbell was reported stabbed and stabbed multiple times for his body just after 8:00 hours at his home allegedly by a 13-member gang.
Kaieteur News had reported that Campbell’s younger brother, Brandon, had been attacked by two men on the day of the incident, while he was standing in the yard of their home. He was stabbed twice with scissors, one to his abdomen and another to his chest.
After hearing the commotion, Campbell rushed to his brother’s aid and managed to get the intruders out of the yard.
The two attackers were reported to have returned later that day with 11 other men, who were allegedly armed with knives, cuttings and beams. Six of the alleged assailants entered Campbell’s house and dragged him outside.
The men then allegedly cut and stabbed Campbell until he fell to the ground, before making up for their escape. Campbell’s neighbors then rushed to his aid and carried him to the Georgetown Public Hospital Collaboration in an unconscious state where he succumbed to his injuries seven days later.
An autopsy was conducted and it was revealed that Campbell died of punctured liver. The matter was reported and an investigation launched.