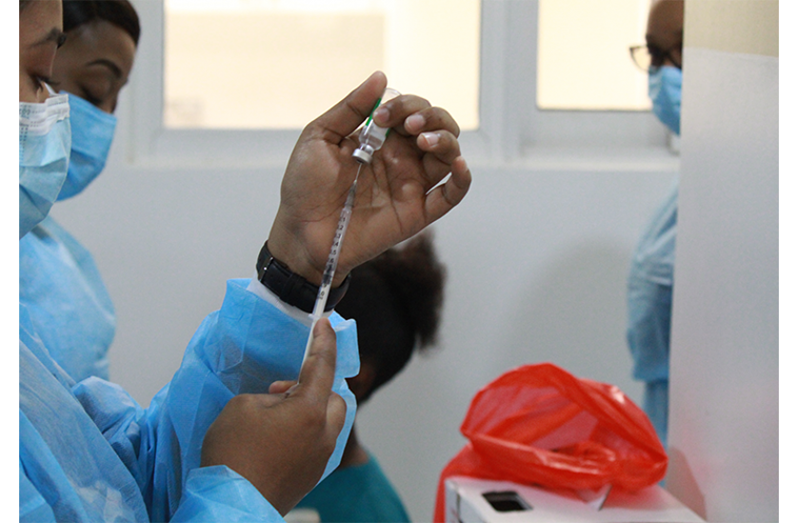 – another batch of Sputnik V Russian vaccine is expected next week

A TOTAL of 52,554 individuals across all regions of Guyana received their first dose of either Oxford-AstraZeneca, Sinopharm or Sputnik V COVID-19 vaccines in the midst of rolling out the intensive COVID-19 vaccination program, according to Health Minister, Dr. Frank Anthony.
During his daily COVID-19 update on Friday, the Health Minister said Guyana’s vaccination program, which began on Feb. 11, has been progressing well.
“On average, for the last three or four days, we’ve been making about 4,500 vaccines every day which is a big increase because when we started, we were making 2,000 and then 3,000,” said the Minister Anthony. Guyana’s ability to give more vaccines has been facilitated on two fronts: the first is that human resources capability has been boosted by the recent deployment of 400 ranks of the Guyana Defense Force (GDF), and, secondly, Guyana has been able to secure several consignments. vaccines.
Based on reports late Thursday, Dr. Anthony reported that 52,554 people received their first injection. He confirmed that this figure was in line with the targets set by the Ministry of Health.

The Sputnik V vaccine is the newest in Guyana and, as such, it will take some time before the individuals vaccinated with this vaccine, and the Oxford-AstraZeneca vaccine, receive their second shot. Importantly, the Health Minister noted that another batch of the Sputnik V vaccine is expected next week. The country received 25,000 doses last week.
Recently, the President, Dr. Irfaan Ali, that Guyana will soon receive some 200,000 doses of the Sputnik V vaccine made in Russian, through an arrangement with the United Arab Emirates (UAE). According to him, the government will spend US $ 20 on each dose of the vaccine; this means that a total of US $ 4M (or approximately GY $ 800M) will be spent to secure the 200,000 doses.