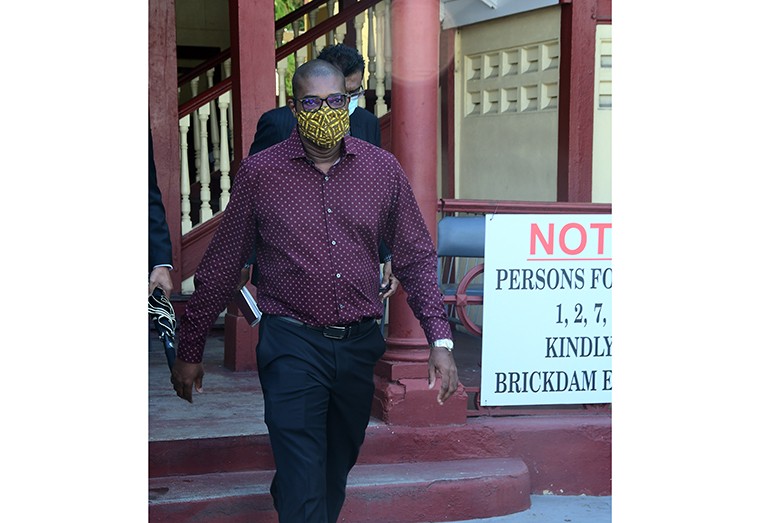 The charge stemmed from the controversial contract awarded for the feasibility study and design of the new Demerara River Crossing in 2016. The duo appeared before Magistrate Leron Daly and was not required to plead to the indictable charge, which he claimed, between November 18 , 2016, and Feb. 1, 2018, in Georgetown, they conspired with each other and with other persons unknown, to defraud Demerara Harbor Bridge Corporation (DHBC) of $ 162,635,015; this money belongs to the Asphalt Equipment, which is covered by the DHBC.

Details of the charge indicated that funding the feasibility study and design for the new Demerara Harbor Bridge was not a function of the DHBC, so the money from the Asphalt Plant account could not have been used to fund the project.
The charge came from the Special Organized Crime Unit (SOCU); both Patterson and Adams were released on $ 200,000 bail each and are expected to return to court on Feb. 15, 2021.
Patterson’s defense team is led by attorney-in-law, Ronald Burch-Smith, who appeared in collaboration with attorneys-in-law, Nigel Hughes and Khemraj Ramjattan; Adams is represented by attorney-in-law, Glen Hanoman.

Speaking to the media out of court on Monday, Hughes described the allegation as “malicious”, noting that the Guyana Government had been approached by a foreign government expressing interest in conducting the feasibility study, and that “this was not is an activity initiated by Mr. Patterson and therefore in the circumstances we believe that this accusation is not only unfounded but wicked. ”

A few supporters of the A Partnership for National Unity + Alliance For Change (APNU + AFC) coalition, led by Opposition Leader Joseph Harmon, gathered outside the court to show support for Patterson.

In 2015, the then Ministry of Public Infrastructure (MPI) invited companies to submit Expressions of Interest (EoIs) to the Chairman of the National Tender Procurement and Administration Board (NPTAB) to conduct a feasibility study for developing options for a new Demerara. Harbor Bridge.

LievenseCSO Engineering Contracting BV – a Dutch company – subsequently submitted a spontaneous proposal to provide consulting services for the Demerara River Bridge project. Patterson, through a memorandum dated November 18, 2016, applied to the then David Granger Cabinet for consideration and approval to use money from the Children’s Asphalt account to fund the feasibility study, and “to enter into a contractual engagement with LievenseCSO from 1st. January, 2017 ”.

This request to Cabinet was not forwarded through the NPTAB, but was submitted directly by Patterson, and on November 25, 2016, Cabinet approved a total of G $ 161,514,420 for the project. The Public Procurement Commission (PPC) had investigated the matter, and concluded that the procurement procedure used to award the contract was contrary to the Procurement Act.

Adams, who signed the contract with LievenseCSO Engineering Contracting, BV on December 9, 2016, informed the PPC during investigations that the DHBC Board was not involved in the decision to use the funds for the stated purposes, and it didn’t. signed the contract on behalf of the DHBC, but only because Patterson had asked him to do so.

The PPC was also informed by Adams and then MPI Permanent Secretary Kenneth Jordan that although the project was funded by the DHBC and signed by Adams, the project was still under the control of the ministry. However, the contract with LievenseCSO Engineering stated that DHBC was the client.

The PPC, in its report stated, “the DHBC does not fall within the definition of a Procurement Entity, as provided in the Cap Procurement Act 73:05. With the exception of projects funded from funds provided from the Government Consolidated Fund, the DHBC may conduct its acquisition in accordance with its own rules and procedures, once they do not conflict with the Procurement Act. “

The report further stated: “In accordance with the advice of the General Manager, DHBC, this Corporation does, however, execute procurement in accordance with the provisions of the Procurement Act. Mr. Adams informed the PPC that this project was not included in the DHBC Work Program and Budget for the financial year in which the consultant was contracted. “

The PPC’s investigation into the matter highlighted that the DHBC was described as the “Client” in the contract and therefore the project must be regarded as one of the DHBC’s. The PPC further concluded that, as a result of Adams’ admission, the contract clearly violated Section 17 (1) of the Procurement Act.

“Section 17 of subsection 1 of the Procurement Act states that NPTAB is responsible for exercising jurisdiction over tenders, in excess of the amounts prescribed in the procurement Regulations. The Regulations state that, for the MPI, Consultancy projects costing more than five million Guyana dollars (ALL $ 5 million) must be administered by the NPTAB, ”the PPC report stated.

Furthermore, Section 54 (1) of the Act states that “The Cabinet shall have the right to review all acquisitions with a value in excess of $ 15,000,000. Cabinet will conduct its review on the basis of a simplified tender evaluation report for adoption by the Authority mentioned in Section 17 (2). “

In June 2019, Guyana Patterson Police cleared of any wrongdoing, stating that, on the basis of legal advice, “there was no misuse of funds; there is no evidence that a crime has been committed, and there is no evidence of collusion between Arie Mol / Lievense CSO and personnel from the Ministry of Public Infrastructure. ”