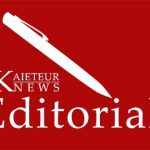 Kaieteur News- In 2014, we launched the tourism stakeholders of this country which was supposed to be the country’s new tourism
theme, “Guyana – South America Not Found.” Tourism Minister Irfaan Ali was then determined to focus on the sector, stating “The opportunity must be maximized to reaffirm Guyana’s commitment to tourism development in Guyana.”
Six years later, while the theme remains the country’s official tourism brand, some things have changed. For one, the then Minister of Tourism, Irfaan Ali is now Dr. Irfaan Ali, President of Guyana and one assumes, as he goes into the process of designing architecture for the future, that his commitment to tourism development remains as strong as it was over half a decade ago.
In a country defined by undeveloped potential, the tourism sector remains – as, and in conjunction with the creative arts – an area of ​​perennially undeveloped potential. For decades, while the country had a wealth of options, especially in the field of nature tourism, this lucrative sector failed to launch, with no overarching plan being developed and implemented over the long term.
Of course, the other more effective thing that has changed since 2014 is COVID-19 which has not only been a public health crisis, but has spawned a global economic crisis, and one of the hardest hit areas has been the global tourism industry.
The United Nations World Tourism Organization (UNWTO) has set out for 2020:
“The decline in the first ten months of the year represents 900 million fewer international tourists arriving compared to the same period in 2019, and translates into a loss of US $ 935 billion in export revenue from international tourism, more than 10 times the loss in 2009 under the impact of the global economic crisis. ”
Perhaps the most symbolic event in how COVID-19 has affected Guyana’s tourism sector was the fact that the newly appointed Minister for Tourism, Industry and Commerce, Mr Oneidge Walrond-Allicock, tested positive for the virus shortly after receiving the portfolio.
While in her first speech to Parliament, the administration’s intention stated, “We want to ensure that when we leave the pandemic, we would have built our local tourism infrastructure, especially our specialist eco-tourism infrastructure to such an extent as our that we are protecting this local market and Guyana will be Guyanese’s first choice, ”we have not yet heard from the Minister on exactly how she is, in effect, the first Tourism Minister in the COVID era, intends to manage this.
As the UNWTO has pointed out, even with some recovery, global tourism figures have been pushed back to their levels 50 years ago.
The theme of crisis and opportunity that is often repeated is relevant here but it is essential that we move beyond the rhetoric of commitment to development in the development of the tourism industry in Guyana – this opportunity as course is that COVID-19 served as a sort of leveler, pushing more established destinations down to where Guyana was and perhaps lower given the level of debt that many properties have had in the world over.
It remains unknown what policy directions the government intends to take the industry in this year, and what budget allocation will be given to support those directions, but the This goes beyond our return to the flat pupal stage, which we’ve been stuck with for decades.
The UNWTO presents a two- to three-year timeline for the recovery of the global tourism industry, which means that whatever Guyana has to do to transform our national industry has a specific and relatively short timeframe attached to him.
Unless we act urgently and with intelligence, that slogan is going to prove more of a label than attract – we’re going to remain undetected, which arguably works against the growth and sustainability of the tourism sector.