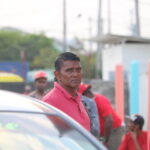 Kaieteur News – The ruling People’s Progressive / Civic Party is mourning the death of one of its leaders, Majeed Hussain. Hussain was a member of the party’s Central Committee, one of the highest decision-making bodies in the party.
He was a well-known leader in the campaign and was one of the faces of the so-called Guardians of Democracy, who camped for weeks at the Kingston headquarters of the Guyana Elections Commission, to guard the ballot boxes there last year.
PPP, in yesterday’s statement, said he died in the morning. Family members said he was hospitalized more than a week ago after testing positive with COVID-19. He was hooked with a ventilator but couldn’t do it.
PPP said Hussain serves the party in several roles.
“He was a member of the Central Committee. He was a true patriot who was integral to the fight to counter the APNU + AFC’s attempt to overturn the will of the Guyanese people by rigging the March 2, 2020 General and Regional Elections. ”
The party said she expressed her deepest sympathies with Hussain’s family and relatives and members of the PPP family who knew and loved this “friendly and humble leader.”
Attorney General Anil Nandlall, who joined to express his disappointment, said he awoke to the shocking news that Hussain had died.
He said Hussain was one of the unsung heroes of last year’s elections.
“He was your” proverbial work horse; He was an outstanding political “foot soldier”; he was a leader. During those five months alone, he was not only the leader of the group that guarded the containers with the ballot boxes, 24 hours a day, but he was the Commissioner for Oaths of Affidavits and a Justice of the Peace who sat with me , sometimes through the night and into daylight hours, to swear the numerous Affidavits, which had to be filed in the litigation series that permeated that period. He was always ready on call, without excuse or hesitation, despite the hour. ”