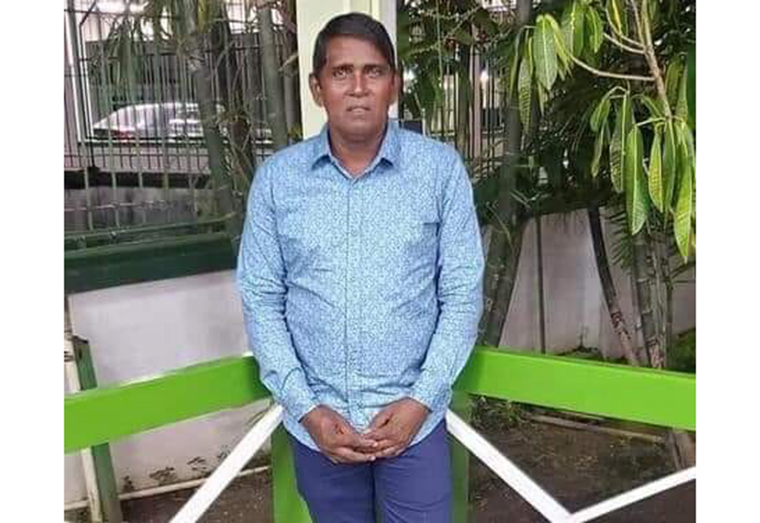 By Rehana Ahamad
STALWART and the respected “foot soldier” of the People’s Progressive / Civic Party (PPP / C), Majeed Hussain, died Saturday morning after losing his battle with the novel coronavirus (COVID-19).
The 59-year-old Diamond resident, East Bank Demerara is left to mourn his wife and three children, along with many friends and colleagues in the political arena, his party is fellows at the PPP / C, and some within the Parliamentary Opposition.

Vice President Bharrat Jagdeo, in a post on Facebook, said Hussain’s passing represented a significant loss not only to the PPP / C, but to Guyana as a whole.

“He was a fellow, friend, and dedicated worker committed to the cause of the rise of the Guyanese people,” said Jagdeo.

In expressing his condolences to the Hussain family, the former President reflected on Hussain’s role during the 2020 General and Regional Elections, where he fought against attempts to “overturn our democracy.”
“Guyana has lost a true son to the soil,” maintained the Vice President.

Meanwhile, PPP / C Chief Whip and Minister for Governance and Parliamentary Affairs Gail Teixeira described Hussain as a tireless person, whose contributions as ‘Guardian of Democracy’ were invaluable.
“He was the key leader of the Guardians of Democracy who guarded the ballot boxes from March 2, (Election Day) until August 2, every day for 24 hours,” Teixeira recalled.

He added, “These fellows, led by Majeed and others, defended the attempt to overthrow our democracy. We will always owe our debt to leaders like Majeed, and we will miss him, because he is someone who was always available, never said no, or cannot be done, and always fulfilled, ” Teixeira told the Sunday Chronicle.
The minister noted that although Hussain lost his fight against COVID-19, he would forever be remembered as a great leader within the PPP.

“We would like to tell his family and friends that we are honored to have worked with us for so many years and to be our party leader for so many years. They should always be proud of it, ”he said.
Attorney General and Minister for Legal Affairs Anil Nandlall shared similar sentiments through his Facebook page, emphasizing that Hussain is an outstanding “foot soldier” for the PPP / C. As well as being the leader of the ‘Guardians of Democracy’, Hussain was also a Justice of the Peace, who gave much support to his party in that capacity.

“He sat with me, sometimes all night and into daylight hours, to swear the numerous Affidavits that had to be filed in the litigation series that permeated that period (2020 election). He was always ready on call, without excuse or hesitation, despite the hour, ”Nandlall said in his Facebook post.

In a previous post on Facebook bidding farewell 2020, Nandlall extensively scrutinized the 2020 General and Regional Elections, in which he said the unprecedented ordeal had produced many great and unsung heroes, among them a dedicated Majeed Hussain.

“Hopefully, sooner or later, this epoch will be properly analyzed and documented for the future and the contributions of so many recognized and put into perspective. When this analysis is done, Majeed Hussain will appear as prominent as anyone, ”Nandlall maintained.

Offering condolences to the family, Nandlall said Hussain is a proverbial ‘working horse’ whose rich legacy of fighting for the PPP and the Guyanese people will live on.

EXPRESS FACILITIES OPPORTUNITIES MP
In an invited comment, the Secretary General of the National People’s Congress (PNC), Amna Ally said she was deeply saddened by the passing of one of the pillars of the PPP / C, describing him as a very hard worker.
“I would like to express my condolences to his family and his party. I’ve known Majeed for a very, very long time. Despite our political differences, Majeed and I had a very warm and nice relationship; I’m really sad to hear this news, ”said Ally.

Also in an invited comment, Opposition Member of Parliament and Leader of the Alliance for Change, Khemraj Ramjattan, joined the government in mourning the loss of Hussain. Ramjattan, who was once a distinguished member of the PPP / C, shared good relations with the late Hussain. They both worked closely during their time as members of the party’s youth branch, the Progressive Youth Organization (PYO).

“I want to congratulate his efforts while I was leader of the PYO, especially when we had to change the composition of the PYO,” Ramjattan told the Guyana Chronicle.

Much like Nandlall, Ramjattan also described Hussain as the proverbial ‘working horse’.
“He was one of those who pushed out during very difficult times in 1990 – 1992 with Ronald Singh and Lionel Peters and so … the ‘proverbial work horse I would say … almost anything you asked him to do over the PPP at that time, he would do… he was very loyal, and that loyalty stayed right up until his death, ”Ramjattan reflected.

The former Vice President reminisced about his last and final meeting with Hussain, during a recount of the votes cast on March 2, 2020.

“At the Arthur Chung Convention Center, I met him and we had a long talk, talking about the good ol ‘days. My condolences go out to his family… I know he is one who has fought hard over the years, ”Ramjattan recalled.

He added, “It’s a bad thing that his passing was so early, but it was good to know the memories of great people like Majeed Hussein.”

“Person in charge of people; he didn’t mind which party you were coming from. He worked dedicated to his family. He was an excellent and passionate friend and he didn’t care much where you met or the circumstances in which you were there; he was simply happy to see you, ”said Shuman in a Facebook post.

“On behalf of the people of Region Ten, I would like to express our deepest sympathy to the family, relatives and friends of Mr Majeed Hussain who was given responsibilities for CDCs in the region.”