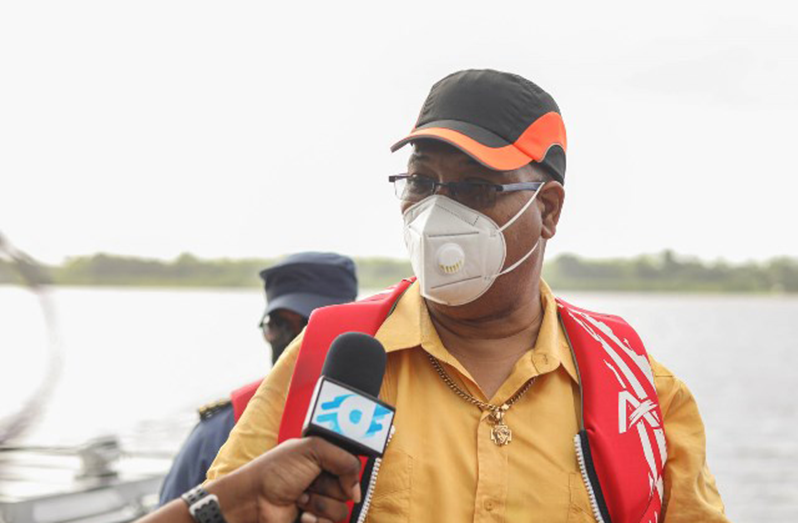 PRELIMINARY work on the new road corridor between Bartica, Region Seven (Cuyuni-Mazaruni), and Timehri, East Demerara Bank (EBD), has begun, according to Public Works Minister Juan Edghill. Minister Edghill and a team of technical personnel, including former President and Prime Minister Samuel Hinds, examined the proposed route for the road on Wednesday. Speaking to the Department of Public Information (DPI) in the Timehri section of the proposed route, Minister Edghill said: “The possibility of a Bartica to Timehri route is no longer an idea, it is something that can be done. ” The exploration of the route began with a short boat trip from Bartica to Foulmouth Dock on the Essequibo River, then along a logging route to the Makouria River, then to Sand Hills and Timehri. Minister Edghill said the project would improve the commute between the coast and hinterland, by significantly reducing travel time, as commuters would no longer need to travel to Parika, then travel to Bartica, and vice versa .
Similarly, citizens will not have to travel to Linden, then to Rockstone, through to Sherima Crossing to get a boat, and then make their way to Bartica.
Minister Edghill said the project would complement a similar road link made from Bartica to Parika, Region Three (Essequibo-West Demerara Islands). Eventually, that link will see a network stretching from Parika to Goshen and on to Bartica.

The minister added that the project also ties into other major infrastructure works such as the Schoonord alignment to Parika.
Like the other major roadworks, the Bartica-Timehri route will open up new lands, leading to increased opportunities for agriculture, commerce, housing and tourism.
Explaining the plan, Minister Edghill said: “We will go to the drawing board with the coordinates. We will look at all the practicalities and of course the shortest possible route is what we will explore. We’ll probably have to get a geologist to do some soil testing to make sure we have materials at the closest point to building that road.

“I would suspect within another five to six weeks of this trip, that my engineers will be able to do some design and the money attributed in 2021 will start to break alignment.”

Further, he said the ministry will later decide on the best option to facilitate boat crossings where the road ends at Timehri and Bartica sections.
Hinds, meanwhile, played a key role in Wednesday’s practice, as he had an institutional knowledge of the route.
The former First Minister noted that the new road network was an important part of the government’s development agenda.
“Development is a process that requires us to work on extending roads and infrastructure … This is, I think, a good step in the overall development of our country,” Hinds reasoned.
This year’s budget provides $ 25.6 billion for road and bridge construction through the Public Works Administration.