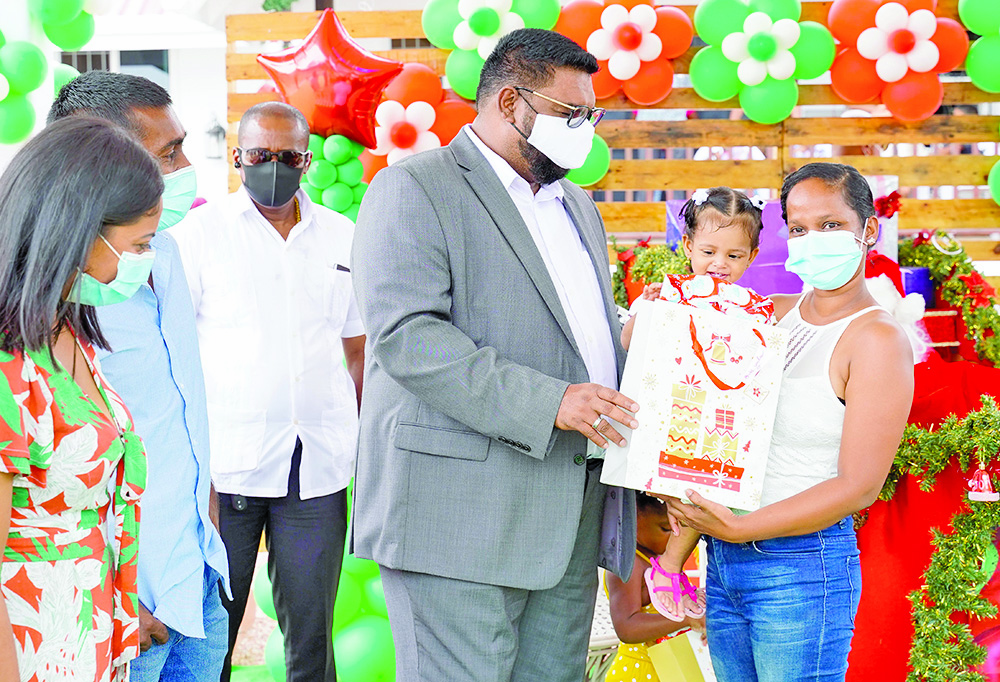 Nearly 100 children from the community were invited to take part in the festival, which was complete with the small village of Santa.
In his remarks, President Ali praised the businessman for his insight, his contributions to the manufacturing and agriculture sectors as well as his gesture of giving back to the community.
“I am delighted today to be involved in this role … I am delighted to see Chis giving back to the community,” the Head of State is quoted by the Public Services and Press Services Unit the President. . According to a statement from the Unit, Ali also addressed community members and assured them that his Government continued to focus on developing the country’s agricultural sector.

“We are ready and willing to support you so that you can continue to support the community at large.” She also said the event was a good example to the children in the community of the merits of giving back.
The President invited scores of elderly people from the community to receive Christmas hampers.

“You are a great asset and I am delighted to be here to share with you and to assure you that we will continue to work hard to improve your lives by providing better services such as healthcare.” On his own behalf, President Ali presented the Christmas packages to the elderly.
He then joined the family to distribute the toys to the collected boys and girls. In his comments, Persaud explained that the activity was his way of giving back to the community and spreading fun.

The Department of Public Information reported that the Prime Minister when addressing residents in the various communities had said that the Government prides itself on being a caring Ministry that is responsive to the needs of the people and will continue to implement initiatives that will directly benefit Guyanese.
He highlighted that not only did the Government reinstate the uniform allowance for school children in the emergency budget during the COVID-19 pandemic, but that parents will also receive a $ 15,000 cash grant for all school-aged children from 2021.
“Starting next year under the ‘We Care Program,’ we will be giving $ 15,000 for each [school-aged] child, and we commit to increasing that money every year, so by 2025 you will receive $ 50,000 for each [school-aged] the Prime Minister is quoted as saying.
Kwatamang resident, Vernica Farias, DPI, said she was very grateful for the visit from the Prime Minister and was pleased to have received the cash grant, which will assist her and other residents who have been have financial difficulties as a result of the pandemic.
“The First Minister’s visit was very important to us because it’s the first of its kind, so we’re happy to be here, and the voucher will be of great benefit to us. It came in time when we really needed it because the pandemic has affected us greatly and will help us prepare our children for school or get them other materials, ”said Farias.
Toshao from St Ignatius village, Dennis Bennidict, also echoed similar sentiments, saying that the assistance was well received, as many people would have found it difficult to get school supplies for their children.
The Prime Minister visited Woweta, Kwatamang, Rupertee, Annai, Aranaputa, Katoka, Yupukari, Quatata, Kaicumbay and the central district of Lethem.
Each Minister went to different communities in the region.

Goodwill for children
Also, on Saturday, Natural Resources Minister Vikram Bharrat joined the campaign to take goodwill to children during this Christmas period.
In Region Six, he made gifts to more than 50 children.
At the Berbice Anjuman orphanage in Philadelphia Street in New Amsterdam, 20 children received gifts from the Minister and in Albion, an additional 30.
Speaking to the media, Minister Bharrat said that children in other regions also benefit from similar exercises.
Minister Bharrat also promised the children at Amsterdam New Orphanage that they will receive tablets from his Ministry next year, once they maintain an 80 per cent pass rate at school.