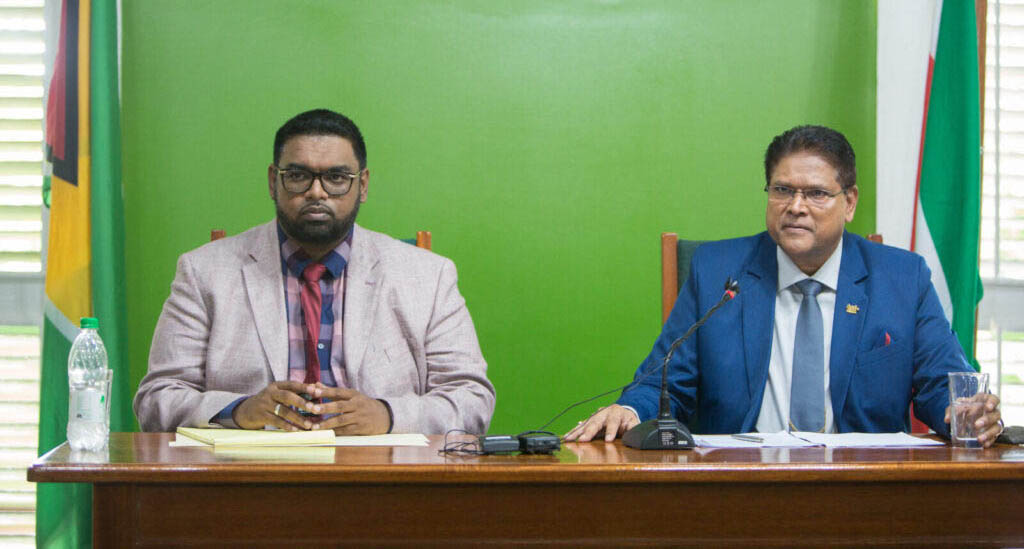 With Guyana and Suriname realizing significant oil discoveries that have changed fortunes in recent years, two of South America’s poorest countries who have been locked up in border disputes characterized by awkward conflicts could be positioning themselves to take part in a co-operative that could set both countries on a path to comprehensive economic transformation.

Earlier this week, in his first international assignment since taking office as Head of State in August, President Irfaan Ali visited Suriname, his contrasting number having visited Guyana earlier to be installed as President Ali.

Discussions between the two Heads of State in the Surinamese capital Paramaribo explored the possibility of cooperation to create a deepwater harbor that will provide seafront support services for the huge volumes of hydrocarbon resources found in the Guyana-Suriname Basin.

On Tuesday President Ali sat down with his Surinamese counterpart Chandrikapersad Santokhi in a media briefing after they both signed a Memorandum of Understanding which, among other things, listed several infrastructure projects across the Corentyne River as well what has been described as a formation agreement for the Strategic Dialogue and Cooperation Platform between the two countries.

All of this follows eighteen separate oil discoveries realized by US oil company ExxonMobil dating back to 2015 that are thought to amount to about nine billion barrels of recoverable oil resources. Last year, the French company Apache broke the news that it had discovered about 1.8 billion barrels of recoverable oil in Suriname’s Block 58 in the basin. The press conference revealed that the first meeting of the bilateral working group for the Strategic Dialogue Cooperation Platform was held during the Guyanese President’s stay in Paramibo.

The potentially dramatic change in the economic circumstances of both countries could play a major role in helping settle a border dispute that, twenty years ago, saw tensions rising between them after Surinamese gunboats turned offshore CGX oil rig Guyana. Since then both countries have enjoyed good people-to-people relationships although occasional cross-border tensions have arisen from time to time.

“As small border nations it is of paramount importance to maintain a good neighborhood, join efforts and form strategic alliances to maximize the success of developing the aspirations of our people in different areas of the economy” The President is quoted as saying Santokhi says. The Surinamese President is also reported to have said that the recent oil discoveries have opened the way for momentum to focus on sustainable development and the realization of “solving the current common challenges of two developing countries”.

The Working Group has been jointly assigned the task of trying to determine the best way to realize the anticipated offshore base that is expected to be a US $ 1 billion investment. Signs that the two administrations recently installed in Suriname and Guyana were moving to consolidate bilateral relations following the Surinamese President’s visit to Guyana and the subsequent visit to the site for the proposed construction of a bridge across the Corentyne River by official teams of both countries. .

Further, earlier this month, the Government of Guyana revealed that it would seek Expressions of Interest for the development of a deep-water harbor in Berbice, which, according to Public Works Minister Juan Edghill, would “facilitate the possibility of a ship landing cruise, ”seafront facilities and the ability to bring in larger ships. ”

On the issue of setting up the joint facility, President Ali is quoted as saying that both countries are currently “exploring synergies”.