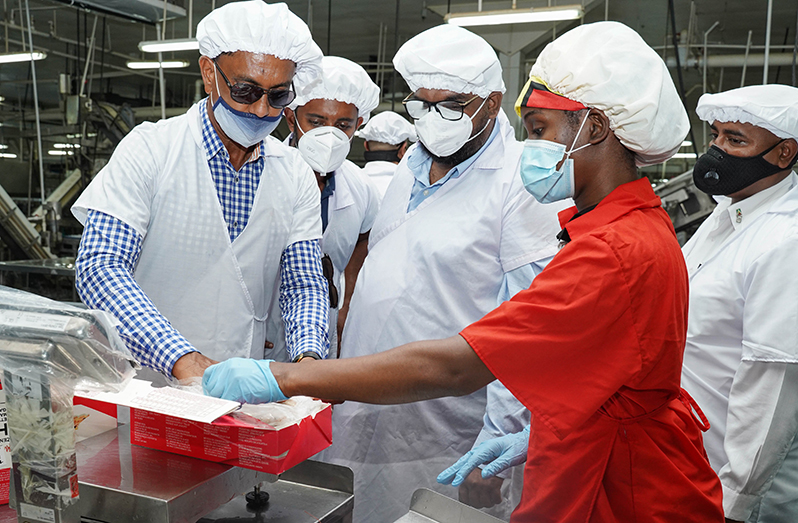 In keeping with the need for innovation in the midst of a volatile global economy, Pritipaul Singh Investments Inc. has invested US $ 75 million (over G $ 16B) in retrofitting and expanding its Providence, East Bank Demerara (EBD) location to state of the art. facility -art, with increased production capacity.

This company is one of the largest, modernized and most diverse fish and shrimp processing producers in Guyana. Its operations include several advanced entities that assist in the harvesting, processing, packaging and storage of seafood products.

The company, since its inception in 1999, operated exclusively in McDoom, on the lower East Bank, until it acquired its second production factory by purchasing the former assets of Georgetown Food and Trading Company in Providence.

According to a statement from the President’s Office, both facilities were inspected by President Dr. Irfaan Ali during a tour on Monday.

During his tour of the Providence facility, the President was informed of the ongoing expansion, which is expected to create additional jobs.

“What’s happening in Providence, we have to consolidate Pritipaul Singh Investments; we are moving our operations, as we have two locations. Instead of having two locations, we consolidate the business. Due to what’s happening in the world environment, due to economic conditions, and to become more profitable it is wiser to consolidate the business and maximize our efficiency, ”the company’s CEO (CEO) , Pritipaul Singh Snr. He said.

The businessman said the facility in Providence, once retrofitted, will have the ability to take on the challenges of the fishing sector, whether it is aquaculture or traditional fisheries. He added that his company will also be instrumental in the marketing, production and export of fish.

Long-term goals and visions such as those outlined by Singh are considered paramount when formulating policies and implementing programs that will facilitate growth, President Ali said.
The Head of State said the relationship between the private sector and government was synergistic, and extremely important to the overall development of Guyana.

“I think what is happening in the sector needs to be appreciated. I am also very happy to hear about Pritipaul Singh Investments’ long-term plans, not only in a wild catch, but in aquaculture. The number of people employed here is huge; his contribution to the economy is undoubtedly huge, no doubt, ”said the President.

Since being elected to office in August 2020, President Ali has claimed that all sectors, including fisheries, would be strengthened.

It was recently reported that the “tide of 2020” was not enough to limit the growth of the fishing industry, which remained resilient throughout the year, and even achieved revenues in excess of $ 16 billion.

Ecological challenges exacerbated by a protracted and pandemic global electoral process were not easy for stakeholders in the fishing industry, but, in the end, the traditional aspect of this industry raked in $ 16,033,405,740, while aquaculture grossed $ 207,251,016.

President Ali had the opportunity, during his guided tour, to see through an investor’s eyes how operations in this sector have been driving growth.

“I thought it was necessary today to come out and visit one of our largest production facilities, in terms of our fisheries sector, and the products they export. It was a pleasure and a great pleasure to visit Pritipaul Investments. What I have learned today is the size of this investment; the size of the sector itself, and the opportunities within the sector, ”said the Head of State.

President Ali also noted that it was essential for him to visit the facility to gain a better understanding of its processes and functions.

The President, over the coming weeks, plans to visit more processing facilities to get information for crafting programs and policies to respond to operator needs.