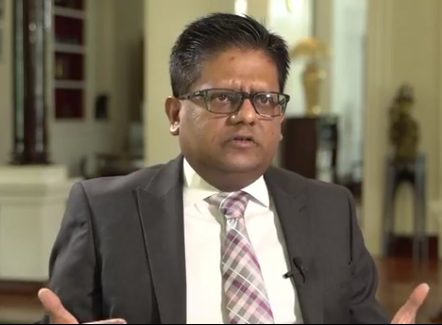 A Senior Minister in the Office of the President, with responsibility for Finance, Dr Ashni Singh, has made it clear that the Government sees the Private Sector as an important partner in national development and economic growth.
In a recent interview with US radio publisher Farook Juman, Singh mentioned the importance of the People’s Progressive Party Government (PPP) to the Private Sector. In fact, he pointed out that one of the first acts of President Dr. Irfaan Ali as President meets with members of the business community.
“This Government views job creation and Private Sector growth as the major source of economic growth and wellbeing in the country. This is probably best illustrated by President Ali’s invitation on the first working day as President, (when) he invited Private Sector leaders to a meeting, ”Dr Singh detailed.

“This conveys the level of attention we are giving to developing close working engagement with the Private Sector in Guyana, and ensuring that we do everything to foster private sector participation, confidence, growth and expansion. So, a lot of this is about restoring confidence in the Private Sector. ”
According to Dr Singh, this is in stark contrast to the opposition of the previous A Partnership for National Unity / Alliance for Change (APNU / AFC) Government towards the private sector. He explained that the PPP Government immediately put that approach aside when it took office.
“The Private Sector is not our enemy, in contrast to our predecessors in office, who clearly regarded the Private Sector as their enemy. The Private Sector does not compete with us. In contrast, just like the Government, the Private Sector is in the business of growing the economy and developing the country. So we’ve sent the signal that we’re a business-friendly Government, ”he explained.
Singh noted that the new, business-friendly atmosphere is evident in many ways, including the PPP Government’s tax policies. The numerous punitive tax measures of the APNU / AFC were relaxed by the new Government.
“They (APNU / AFC) do not understand the role that the Private Sector plays in investing and creating jobs and generating income for people, and therefore do not see the detrimental effects of taxation ‘ r Private Sector out of business getting them. people’s lives, ”said the Minister.
“We have reversed many of the punitive tax measures immediately. Budget 2020 did it immediately, not just on businesses, but on households. And when you reverse punitive tax measures on consumers, you put disposable income in the hands of consumers, who then go to spend that disposable income in the market. ”

Invest-friendly
Calling attention to Guyana’s status as an investment friendly country, President Ali had previously highlighted the country’s attractive investment regime, which is being redesigned to become more investment friendly. For example, a number of measures are included in the 2020 National Emergency Budget which the President has said aims to improve ease of doing business, increase competitiveness, and reduce investment and production costs. In this regard, several key budget measures have been implemented, including tax concessions on agro-processing, cold storage and packaging; removal of Value Added Tax (VAT) on exports; and allowing exporters, including those in the fishing, rice and timber industries, to reclaim input VAT.
Measures to reduce investment and production costs include the removal of VAT on building and construction materials, electricity and water; the removal of VAT on fertilizers, agro-chemicals, pesticides and key inputs to the poultry sector; and the poultry industry zero rating.
At the 25th Annual Guyana Manufacturing and Services Association (GMSA) Awards Ceremony last month, Ali had said that the upcoming expansion of Guyana’s economy with the oil and gas sector would open the sluice gates to business opportunities as well as expand the fiscal space country to better address. deficiencies in the productive sectors.
On this note, he said that the Government would announce policies to expand, strengthen and diversify manufacturing and services.
According to Ali, manufacturing and services will become the mainstays of the ‘new economy’.
In the same breath, however, he had said that traditional sectors would not be neglected. Despite the problems facing these sectors, the President argues, they together remain a lifeline for tens of thousands of Guyanese. (G3)