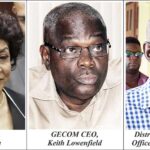 Kaieteur News – With Local Government Elections (LGE) due in the coming year, the Private Sector Commission (PSC) has called on those officials threatened by the Guyana Elections Commission (GECOM) to be sacked before ‘ the startup process.
Those include GECOM’s Chief Returning Officer (CEO), Keith Lowenfield, Deputy CEO Roxanne Myers, and Clairmont Mingo, the Four District Returning Officers, who have issues pending before the courts for their role during controversial elections March 2.
To date, there has been no indication from GECOM or the Chairman, Ret’d Justice Claudette Singh, what steps would be taken to reprimand those officials. The PSC also highlighted in their statement, “To the best of our knowledge, none of these officers have been dismissed from their employment with GECOM, nor have they been suspended from duty.”
“It is unthinkable and certainly unacceptable that GECOM should go on to hold Local Government Elections while these officials remain employed and involved in the conduct of these elections,” the private sector body added.
The PSC also highlighted that Claudette Singh himself had been silent on any action taken regarding GECOM’s readiness to hold LGE.
“Although we have not heard anything officially from the President’s Office, it is likely that President Ali has already questioned the Chairman of GECOM about GEOCOM’s willingness to hold these Elections,” the PSC continued, noting that there is sufficient time is long gone since the government took office for the public to find out what’s going on at GECOM.
Further on, the PSC outlined that the current GECOM Chairman cannot use the current election petition brought by the Opposition Coalition A Partnership for National Unity + Alliance for Change (APNU + AFC) as an “excuse” to clean up the Commission.

“Local Government Elections are likely to take place long before a petition is finally heard. The Election Petition cannot be used as a means of delaying or delaying GECOM’s willingness to hold an election, ”he said.
The PSC highlighted that Guyana has already begun to recover from the five-month hiatus caused by the long elections in March despite the ongoing challenge of the COVID-19 pandemic.
In order for GECOM to properly prepare itself to hold the LGE, the PSC highlighted, it would be a “very regressive step” and lead to Guyana being forced to suffer the threat of further political instability.
“Therefore, the Private Sector Commission wishes to encourage the Chair of the Electoral Commission to speak up and speak out about the steps being taken to put right everything that has gone wrong at GECOM and to make it fast , ”Said the PSC.
Although the Ali government has indicated that it is committed to fulfilling its promise for LGE next year, Vice President Bharrat Jagdeo echoed similar sentiments to the PSC at a press conference last month where she made clear that “criminal elements” of GECOM must be removed.
“We have no confidence,” said Jagdeo, “with criminals running the system. And so, we expect the Commission to get rid of the criminals. They don’t need any evidence. The whole country knows that these are criminal types who tried to steal the elections, and put this country through trauma. They cannot run any election, and I hope that the Chairman of the Commission now has to fight the criminals. And so, there must be changes there, that’s what we want. ”