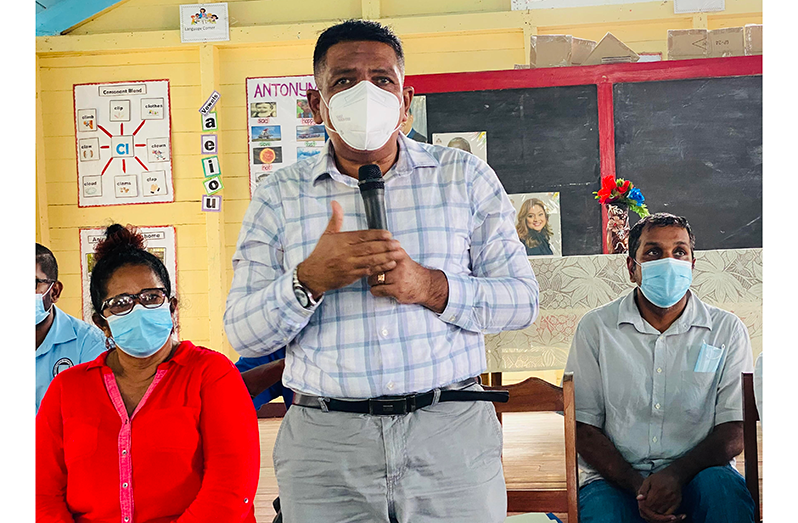 AGRICULTURE Minister Zulfikar Mustapha announced on Friday that money for the purchase of machinery to help improve drainage and irrigation in communities in the Pomeroon River, will be included in the 2021. Budget. The pontoon and two diggers are expected alleviate flooding in those communities, the minister said, adding, in the future

a week, farmers can expect to plant supplies and fertilizer to help them replant their crops. The minister made these disclosures during public meetings held in Jacklow in the Upper Pomeroon and Marlborough in the Lower Pomeroon.

rainfall. He said the ministry, in conjunction with the NDIA, in drawing up its budget for 2021, will include funding for the purchase of D&I equipment. “We can’t keep doing things the old way. We have to implement the new system. All officials of the various agencies will be more responsive so that farmers benefit, ”said the minister.

available in remote communities. Addressing the recent floods that flooded several acres of farmland in the Pomeroon River, the minister said an assessment team had visited the area, and made recommendations. He said planting materials, fertilizers and achoushi bait will be sent through the National Institute of Agricultural Research and Extension (NAREI) to Pomeroon communities by next week.

It was explained that assistance is given based on the number of losses incurred by each farmer. “We will look at the needs of all farmers; this cannot be shared equally. However, based on the amount of spills, consideration will be extended to planting materials, chemicals and fertilizers to get back on your farm, ”added Minister Zulfikar. The minister also announced that the NDIA team will carry out a further assessment in Pomeroon communities to determine how many block drains will be needed. He informed that this

drainage work will begin after the ministry budget is passed. “We will ensure that all major stakeholders are working – the RDC, NDC, NDIA, and the Ministry of Agriculture to represent the farmers in the Pomeroon,” he said. During both meetings, cash crop farmers asked for block drains, fertilizers, fuel, and also aid in suspension.

Calls were also made for the dredging of the Pomeroon River and the cleaning of several canals at Grand Providence and sluice gates at Jacklow. Farmers expressed their desire to see field officials from NARIE more often. Farmers also requested small pumps for the Nile Cozier area, while the cash crop farmers in that area asked for the canal to be cleared. The minister’s team included MoA Director General Madanlall Ramraj; NDIA CEO (CEO) Fredrick Flatts; NDIA board chair, Lionel Wordsworth; CEO of NARIE, Dr. Oudho Homenauth, and other technical officials from the region.