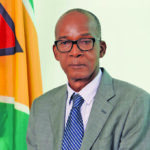 Kaieteur News – Guyana’s workforce is expected to be strengthened with the Ministry of Labor’s plan to recruit more Labor and Occupational Health and Safety (OHS) Officers soon. This is according to Labor Minister Joseph Hamilton, who made the disclosure while speaking to Kaieteur News yesterday.
The Minister said that the Ministry of Public Service has recently given permission to improve components within the workforce, which includes hiring more officers. In light of that, he noted that the Ministry of Labor will hire ten labor officers and 18 OHS officers, who will be distributed among the regions on the basis of their needs.
Hamilton had appeared on Kaieteur Radio’s “Wake Up Guyana” radio program last year where he expressed that Guyana needs only about 20% of the required number of labor and OHS officers to monitor the labor industry efficiently. He said that there are a sufficient number of officials in every region of the country, which has made it extremely difficult for the Ministry of Labor to address labor issues in each region.
According to Hamilton, the central region, Region Four (Demerara-Mahaica), has only eight labor officers standing below the required number while other regions have about one officer each, which he referred to as “sprinklers.”
Now, in the regions with only one labor officer, another is added so that each region can have at least two officers. This, he says, is ideally what the Ministry is aiming for. Hamilton gave a distribution of the new officers regionally, where he said Region One, Two, Five, Seven, Eight and Nine will have one labor officer added and two officers will be in Regions Four and Ten.
In Region Ten, one will serve in Kwakwani, while the other will serve in Linden. As Region Four will have ten labor officers when the two are added, he said two will serve on the East Coast of Demerara, two will serve on the east bank of Demerara and the other six will remain at the central office in Georgetown.
Currently, there are 16 labor officers and nine OHS officers nationwide.
Minister Hamilton also noted that a move had been made to write to the Ministry of Public Services seeking permission to place advertisements for the posts, where they will recruit those who meet the requirements.
It was also reported that a skills assessment survey will be undertaken next month. The Ministry will also conduct a first stage skills assessment on the formal economy by the second quarter of this year / end of June and another on the informal economy by the end of September.
Going forward, he says, these things will help them plan and advise the government on skills needs at a national and regional level.