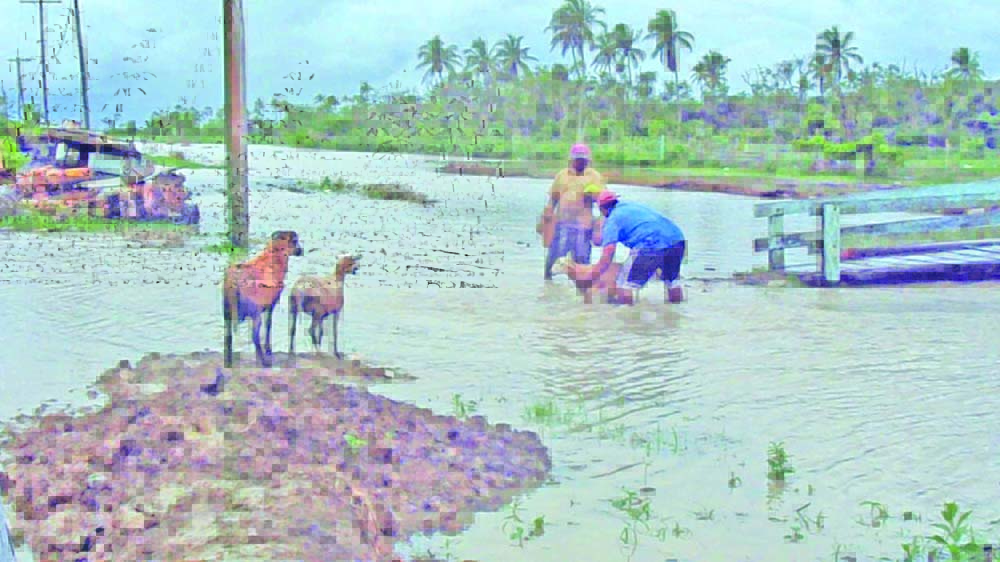 – efforts are being made to drain farmland

The Black Bush Polder, which drowned in the last few days in 2020, had recorded a drop in water level but with the prolonged heavy downpour, the water level is rising again.
According to Armogan, most cash crops are damaged due to flooding. Last Thursday, the Regional Chairman was hopeful that the water level would continue to fall.

However, it was Joanna and Yakusari who were most affected. Farmers had complained that water from the Cookrite Savannah was being released into the canals draining the Polders.
This, they said, was one of the major causes of flooding in Yakusari.
During a community visit on December 29, Agriculture Minister Zulfikar Mustafa had promised that the tubes installed to drain water from the Cookrite Savannah would be removed so that the Savannah would not drain to the Polders.
But Armogan noted that evidence has proven that the water is still drained from Cookrite Savannah to Black Bush Polder.
“The Minister had asked us to close some of those tubes so that the water from the Cookrite Savannah would not be pushed into the Polder Black Bush area. That’s not an easy thing to do because as soon as you block it, the evening they open again and the next day you block it and the night they open it again. So unless we can get the Police there on a 24-hour basis that will be the only way we will be able to manage it. We have tried our best to control it and unfortunately as soon as we close it they open at night so water is coming back into the system again, ”revealed the Chairman.
Cookrite Savannah was established for cattle rearing.
Unfortunately, due to the rise in the price of rice, many cattle farmers have turned to rice cultivation in that area. At present, efforts are being made to drain water out of the Savannah Cookrite for animal and rice crop survival.
Armogan explained that a total of seven miners are currently working at the Black Bush to bring some relief to the farmers and residents.
“In terms of drainage works, we make sure that all canals and especially the drainage canals are to ensure that they are cleaned so that the waterways can be clean and that the water can flow into the sluices and to the pumps because if we have obstructions it means we will have blocked flow into the pumps and sluices. If this happens, even though the pumps and sluices are working, not enough water will be taken to them. ”
The sluice gates are operated on a tidal basis. When the tide is not appropriate for opening the sluice gates, the pumps will operate.