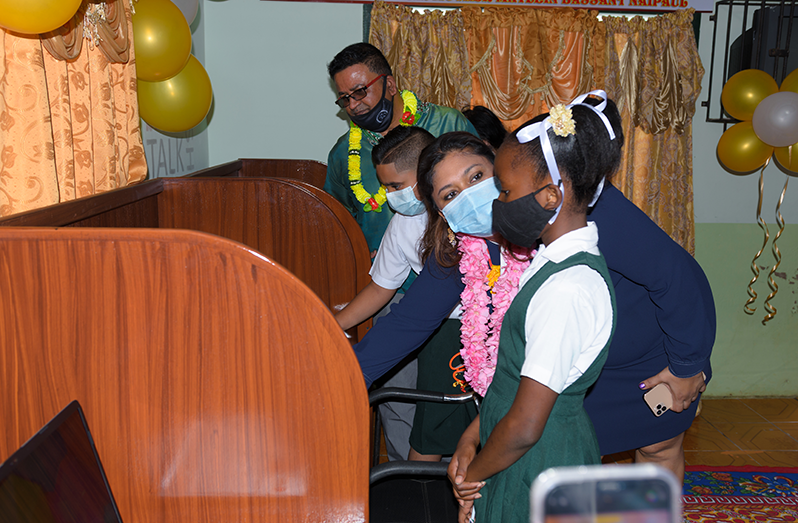 TWO smart classrooms and five computer learning centers in Region Six (East Berbice-Corentyne) were commissioned by Education Minister Priya Manickchand during a visit there on Friday. The smart classrooms were installed at New Amsterdam High School (NASS) and Skeldon Line Path High School, while the computer learning centers at Auchlyne, No. 36, No. 59, No. 63, New Market Anglican and Number, were commissioned. 71 Messiah primary schools.
Aleiyah Fredericks, 16, a student from NASS, who helped Minister Manickchand cut the ceremonial ribbon in her school’s new smart classroom, was impressed by the new facility and is looking forward to seeing how it will be used to improve her learning experience, going forward. .
Currently a Fifth Form student, Fredericks is preparing to write 11 subjects in this year’s Caribbean Certificate of Secondary Education (CSEC) exams. She noted that although it had been a difficult year of learning due to the closure of the school, she was confident of doing well in the exams.
The smart classrooms have an interactive, computerized touch screen whiteboard, two cameras that teachers can use to video the lesson and a monitor connected to the cameras.

The classrooms will be continuously monitored by the ministry to ensure they are working as expected.
“We are committed in the ministry to delivering the smart classrooms in a sensible way. A whole program is being delivered in and around these classrooms. When we reopen schools that opening may not be what we are familiar with, ”the minister said.
At NA Secondary, Principal Vanessa Chisholm hopes to use the benefits of the new amenity to see physics taught in her school as she has no teacher for the subject.
Chisholm, as well as Head of Skeldon Line Path Secondary, Evett Johnson, expressed their gratitude for the initiative in light of the technological needs brought about by the COVID-19 pandemic. Most of the students in Guyana have been learning almost because of the pandemic.
“This institution and the community is undoubtedly a dream come true,” Johnson noted, adding “The occasion is indeed timely and necessary against the backdrop of the modules through which we deliver the school curriculum. COVID-19 dealt us a big blow and schools had to find innovative ways to deliver. ”
He noted that the initiative underlined the government’s commitment to raising education standards across the country.
“This is a testament to the proactive nature of our minister. We are grateful that Skeldon Line Path has been identified for this special initiative, it bodes well for education in the Upper Corentyne, ”he expressed.

Given the new school improvements, Johnson also appealed to the minister for the school to be upgraded to a “List” secondary school.
Meanwhile, at Auchlyne Primary School, Nathaniel Budhu, 11, and nine-year-old Angel Sampson were all too happy to give a demonstration of how the laptops could be used in their school’s computer learning center. Each of the computer learning centers has five laptops, a projector and a projector screen.
The computer learning centers project was led by the Shri Devi Mandir Global Humanitarian Organization based in New York, USA. Pandit Tillack Shivrattan is the head of the foundation. Shivrattan is known for his kindness in Berbice county over the years.
“Today I am delighted,” said Pandit Shivrattan, seeing the initiative come to fruition.
He also pointed out that without the support of generous Guyanese donations in the diaspora, the beneficial gesture would not have been possible.
Shivrattan accompanied the minister to the different schools where the centers were commissioned. Also involved in the visit were Regional Chairman Permaul Armogan and Regional Education Officer Bhagmatie LaCruz.
Armogan expressed deep gratitude to Shivrattan, not only for the initiative extended to the schools, but for everything he has been doing to support communities in the region over the years.
“Thanks to Pandit and the diaspora and we look forward to working with you in the future,” he said.