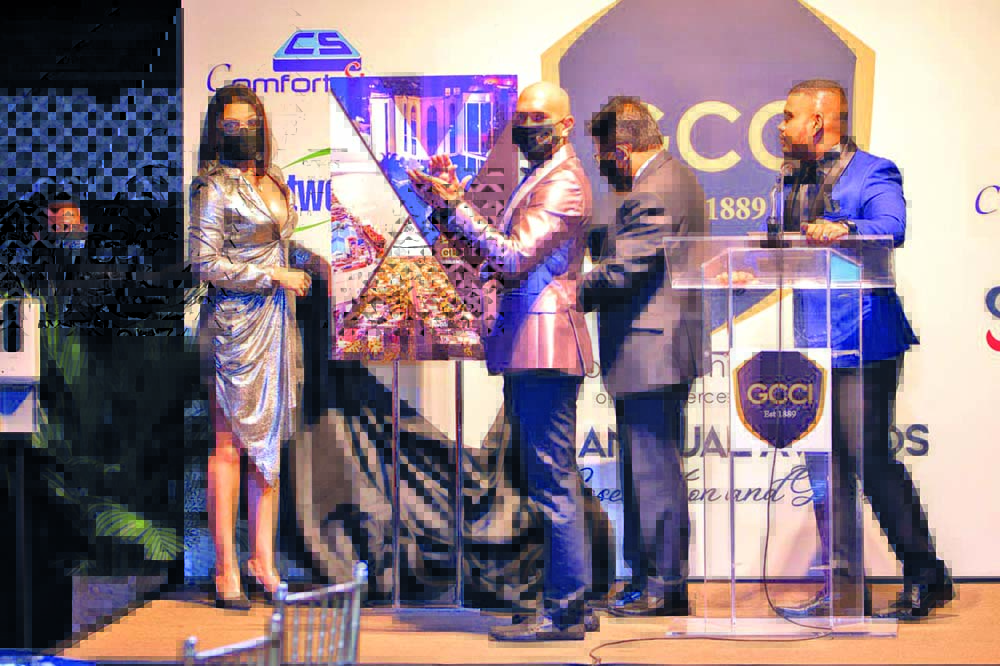 Georgetown Chamber of Commerce and Industry (GCCI) President Nicholas Boyer has said that resilience and inter-relevance would quickly transform the economy and allow Guyana to be a leading nation in the region.
Speaking at the GCCI’s 131st Annual Awards ceremony on Thursday night, he described Boyer 2020 as a year of resilience, due to the fall in the controversial March 2020 Elections as well as the impact of the COVID-19 pandemic.

He said that many Chamber members as well as staff had to adapt to a new way of operating and maintaining contacts. According to Boyer, Guyana’s economy also showed similar resilience.
“Businesses were forced to reorganize their operations to survive economically while still protecting their customers and employees. Ultimately, this tireless effort came to fruition and saw Guyana record 30.9 percent year-end economic growth … We led the world in GDP (Gross Domestic Product) growth last year.
“Unfortunately, a lot of that came from our oil sector. What we have to do for the future is translate that and build a very strong oil-free sector, ”said GCCI President.
The GCCI President urged the membership to embrace foreign investors, which would pave the way for them to expand and develop in existing and new areas. In fact, Boyer noted that, over the past year, the Chamber has forged links with Aberdeen – an oil-producing city in Scotland; and the Newfoundland and Labrador Oil and Gas Industries Association (NOIA) in Canada, as well as with regional partners.

“Your Guyanese economy is going to transform quickly, and we need to learn how to do a different dance than we did before. Many of us focused on our domestic market, with a few companies exporting, this is the opportunity for our companies to grow. We will have to form these partnerships. We will have to learn, and we will have to encourage new practices; but, on the whole, I’m sure that when people look back at this time, they will characterize us as resilient, ”he asserted.
In addition, Boyer outlined the need for cooperation with other local stakeholders.
“Working together, getting that kind of feedback in an organized way, putting it together, making presentations, talking to policy makers, engaging in creative discourse, not breaking the media, and working with that fellow how are we going to build this nation, ”he said.

Boyer further underlined the need for a robust infrastructure plan to facilitate the massive transformation that has been pegged for Guyana. With the Government having already prioritized several transformational infrastructure projects for 2021, the GCCI President highlighted that this would allow entrepreneurs to realize their ideas.
“At the end of the day, everything we think about has a physical footprint … Infrastructure is what will transform the nation, and having a robust infrastructure plan that delivers things like lower energy cost is what will transform us. And we must embrace rapid transformation through infrastructure, through smart policies, smart tax laws and our local private sector engagements, ”he noted.
According to Boyer, himself a Director of National Hardware Ltd, “We are the future that will take the physical infrastructure, marry it with the right kind of technology, planning, entrepreneurship, and build the Guyanese companies I believe that they will go out to conquer the Caribbean, ”he said.
Similarly, the Senior Minister in the President’s Office, with responsibility for Finance, Dr Ashni Singh, assured the meeting at the GCCI Awards Ceremony that the PPP / C Government would create a macroeconomic environment and which would be favorable to investments. and expansion for the local private sector.
He noted that transport infrastructure is high on the Government’s development agenda, which is critical to connectivity, both domestically and regionally.
“Infrastructure is vital to unlocking the economic potential of our country. We know this. We know how important infrastructure is to plan for expansion … Consider for a moment the implications of that international connectivity for the size of the market in which you operate. You know better than we do the benefits of scale. You know better than everyone what it would mean if you were producing for a market, or you were harvesting, or you were providing services for a market that is two or three or four, or 10 times the size of the market you were currently operating in.
“I look forward to the day when I see your companies establishing a presence in all our neighbors,” the Minister asked.
Meanwhile, Dr Singh told members of the private sector that at no other time in Guyana’s history would they witness such a rapid and rapid transition as they are about to see.
The Finance Minister highlighted that the Government, as well as infrastructure, will continue to invest in various areas, particularly in education, to ensure a skilled workforce is available.
However, he explained that this was not the sole responsibility of the Government, which challenged businesses to play their part in building the workforce needed for the future.
At the Awards Ceremony on Thursday, several local businesses and individuals were rewarded for their outstanding work and leadership during the past year. The Chamber also launched a magazine at the ceremony. (G8)