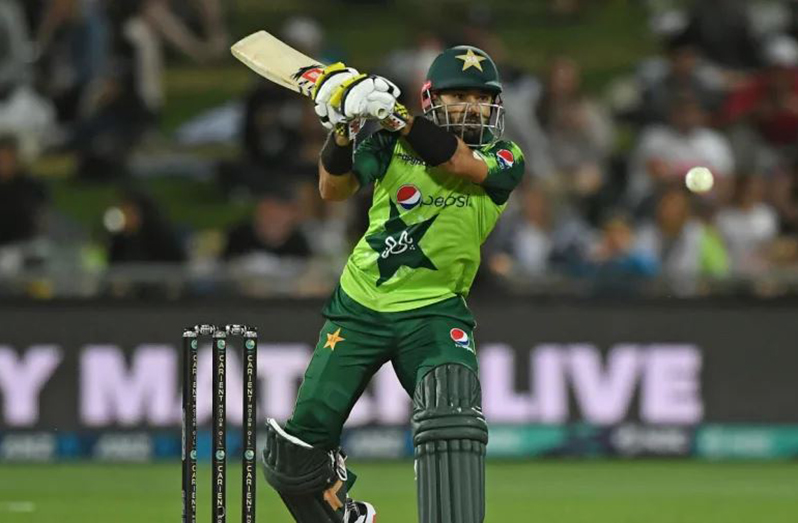 NAPIER, New Zealand (IANS) A superb 89 hit from wicket keeper Mohammad Rizwan ensured that the decent work done by the bowlers did not go in vain as Pakistan registered a four wicket victory in the third and final T20I T20I vs. New Zealand. yesterday.
Choosing to go to the field, Pakistan bowlers kept New Zealand batters under control and despite Devon Conway’s 63 run hill, the hosts welcome 173-7 in their 20 overs at McLean Park. Besides Conway, Tim Seifert – who had been the hero of New Zealand in the first two games – contributed 35 runs, which came off 20 deliveries. Glenn Phillips’ 31 off 20 was also another notable performance for the Black Caps.

For Pakistan, right-arm fast bowler Faheem Ashraf was the bowlers’ choice as he returned with superb figures of 3-20 in his four overs. Haris Rauf and Shaheen Afridi also picked two wickets each, conceding 44 and 43 runs respectively.
Going after the target, Pakistan got off to a good start as Haider Ali and Rizwan made 40 runs for the first wicket in 5.2 overs. After Ali’s dismissal, Mohammad Hafeez joined Rizwan and the duo split a 72 run stand and put the visitors on track for their lone victory in the series.
However, after dismissing Hafeez on his lone score of 41, Pakistan lost three wicket wickets in the form of Khushdil Shah (13), Faheem Ashraf (2) and captain Shadab Khan (0). Towards the end, Iftikhar Ahmed kept his pace and scored 14 unbeaten runs to take Pakistan over the line with two balls to spare and finish the T20I series with a scoreline of 1-2.

For the hosts, Tim Southee starred with the ball as he picked two wickets in his four overs while conceding 25 runs. Scott Kuggeleijn also scalded two wickets. However, it was expensive as he conceded 40 runs in his four overs.
Rizwan, who smashed 10 fours and three sixes during his 59-ball innings, was awarded the Player of the Game while Seifert was declared Player of the Series.
New Zealand and Pakistan will now compete in a two-Test series beginning Saturday at the Bay Oval in Mount Maunganui.
Short scores: New Zealand 173-7 (Devon Conway 63; Faheem Ashraf 3-20) lose to Pakistan 177-6 (Mohammad Rizwan 89; Tim Southee 2-25).