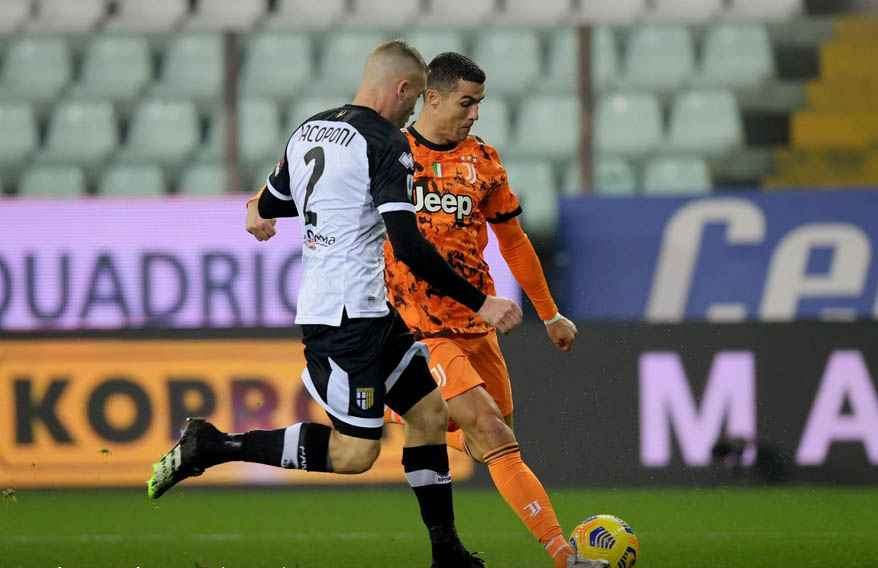 PARMA, Italy, (Reuters) – Cristiano Ronaldo scored twice, taking his Serie A count for the season to 12 in just nine games, as defending champions Juventus cruised to a 4-0 victory at Parma yesterday.

Dejan Kulusevski and Alvaro Morata were also on target although it might have been very different if Juve goalkeeper Gianluigi Buffon, 42, had not saved with his legs very close from Juraj Kucka in the 15th minute.

Juventus, chasing a 10th consecutive title, drew level at 27 points with second-placed Inter Milan, who welcome Spezia on Sunday, and one behind leaders AC Milan, who visit Sassuolo .

Ronaldo’s brace made the Portuguese irrevocable in the league’s top, the 35-year-old player moving two goals clear of AC Milan’s Zlatan Ibrahimovic and Inter Milan’s Romelu Lukaku as he bounced back from his penalty failure against Atalanta on Wednesday.

Parma had the first real chance when a fight ended with the ball being played to Kucka at the far post but his effort was stopped by Buffon.

However, Juve quickly took control and Kulusevski, who played for Parma last season, had too much space in the penalty area and steered the ball in from Alex Sandro’s pass in the 23rd minute.

Ronaldo added the second with a high header three minutes later and Juve were on their way.

Leonardo Bonucci missed a third of close range just before half-time but it didn’t matter as Ronaldo scored with an angle drive three minutes after the break.

Morata was rewarded for an outstanding performance with the fourth as he headed in from a Federico Bernardeschi cross late in the game.